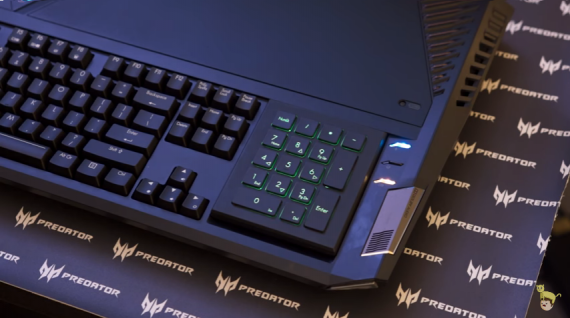 The Predator 21X is massive and expensive - but effective. Priced at a whopping US$8,999, Acer has produced a monster gaming machine that is not for the faint of heart. (Photo : LinusTechTips/YouTube)

Acer's Predator 21X was first teased at the Internationale Funkausstellung Berlin (IFA) last year but did not get its full reveal until the Consumer Electronics Show in Las Vegas, which kicked off on January 5. The device is both massive and effective, but it does come with the hefty price tag to back it up. Definitely not for the faint of heart, the unit is the epitome of gaming.

Right off the bat, the Predator 21X is jaw dropping and awe-inducing with its .21 inch curved display with 21:9 ratio. It weighs 19.4 pounds and is not exactly portable, but it definitely tries to make up for it in terms of specs and features. Under the hood, Acer made no shortcuts in providing the best gaming experience for players.

As noted by Digital Trends, the Predator 21X is powered by the seventh generation of Intel's Core i7-7820HK and a Nvidia GeForce GTX1080 with 16GB of GDDR5X VRAM. Meanwhile, it has four slots for SSDs above and beyond its built-in 64GB of DDR4 RAM. and 1TB HD. These specs make for an exceptionally powerful device that blows its competition out of the water - not that Acer stopped there.

The 21 inch, 21:0 display has a 2560 x 1080 resolution and a 120HZ refresh rate. And while this pixel resolution is not exactly the sharpest on paper, interested buyers should understand that the display size is much larger than the others in the market with higher numbers. The publication confirms that the screen and its display appears sharp and precise. The curved design also provides a more immersive experience as it definitely covers a gamer's vision.

In addition, the Acer Predator 21X is also fitted with a six piece audio system, which consists of four speakers and two subwoofers. The built-in webcam is also 1280 x 720 resolution and it has a Tobii EyeX eye-tracker. But all of these things do not necessarily mean that the laptop does not come without fault.

The biggest drawback seems to be the Predator 21X's battery life. The 88 watt-hour battery is technically smaller than the less powerful gaming laptop's that are already in the market. However, the publication points out that that the device is not exactly built for being portable - not in the standard sense of the world. It is more than likely that the unit will always be plugged into a power source.

What is arguably more important, however, is how it feels underneath fingertips. As Business Insider adds, the Acer Predator 21X has a full-sized mechanical keyboard, much like a standard desktop. The Cherry MX Brown switches are responsive, loud, fast and comfortable to touch. The RGB backlight also features several color options to choose from.

Besides, the standard keyboard has a handful of macro keys, which can be personalized to fit a player or a game's specific needs. However, these keys can also be made to alter things such as fan speed and other system options. On the far right is a trackpad that works that works just as well. But for those who still prefer an external mouse, it can be pulled out and flipped to reveal a numeric keypad.

Lenovo shined at the Consumer Electronics Show 2017, which was held in Las Vegas. In particular, the company made very notable and smart changes to the ThinkPad X1 Carbon and ThinkPad X1 Yoga line.

Acer Predator 21X vs Acer Aspire VX 15: Which Gaming Laptop Is Worth To Get?

Acer is well-known for its superior performance gaming laptops. Here, the upcoming Predator Triton 700 is compared with its sibling, the Predator 21X.

Get These Windows 10 S Budget Laptops From HP And Acer

HP and Acer are selling budget laptops that run in Windows 10 S. Check out the specs of these low-priced devices.

Acer's new Leap Ware smartwatch is packed with sensors that track your health and fitness. It's also equipped with fresh features and a price that's friendly to the pocket.