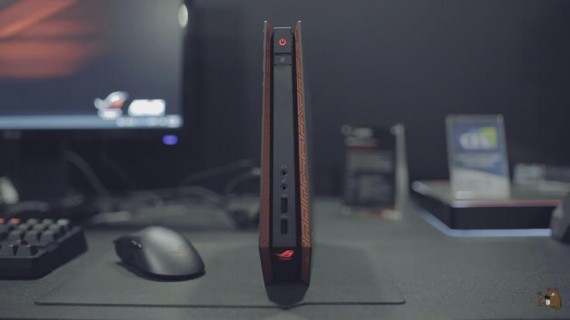 Asus has again knocked it out of the park with the new ROG GR8 compact gaming PC, which the company boasts is the smallest VR-capable machine. (Photo : HardwareCanucks/YouTube)

With the rising trend of virtual reality, several companies have already started to dip their toes into the technology. The technology, meanwhile, has been quickly developing with the help of these companies -- the most recent of which has been Asus. The company's most recent release, the ROG GR8 II, is being boasted as the smallest VR-ready machine there is.

As Tech Radar notes, the compact gaming system is being described as a console-sized machine with all the power of a full desktop machine. The 4-liter rig is fitted with a Core i7-7700 Kaby Lake processor. That, in turn, is backed up to 32GB of DDR4 system memory, as well as a GeForce GTX 1060 graphics card. There is also up to 512GB of storage thanks to an M.2 SSD.

The GR8 is also equipped with a cooling system that is made up of dual fans, copper heat pipes and strategic vents and chambers - all of which ensure optimal airflow. But despite the power and its many efficient parts, the unit is quiet, mostly because of the lid on fan noise, which produces about 23dB when idling.

What really sets the ROG GR8 II apart, however, is that Asus designed the machine with virtual reality in mind. The device, though only measuring 88 x 299 x 281 mm and weighing 4kg, has been tested thoroughly with the Oculus Rift. Furthermore, it is fitted with two HDMI ports and a DisplayPort, so users can connect to both a headset and a monitor at the same time. Digital Trends notes that the device is slightly bigger than its predecessor, but this increase in size allowed Asus to pack the device in with so much more power.

When it comes to aesthetics, the GR8 II makes use of Asus' Aura Sync technology, which allows for lighting across both the system itself, as well as the attached ROG peripherals. Pricing and an official release date have yet to be announced, as the company simply showcased the item during the Consumer Electronic Show in Las Vegas. And while it ultimately depends on the price, it does prove one important thing about virtual reality - that it quality and power need not be sacrificed for portability.

One of the biggest setbacks of the Oculus Rift and the HTC Vive was that it required being tethered to an incredibly powerful computer source. Theoretically, a user was stuck in that space without much hope for movement beyond it. On the other hand, portable VR headsets, such as the Samsung Gear VR or the Google Daydream, did not have that same power. Somehow, the ROG GR8 II is a nice mix in between.

Asus has really been rolling it out with its latest releases and plans, which include Project Valerie and Project Ariana. Project Valerie and Project Ariana allow players to experience gaming in an entirely new way, as individuals will be more so immersed in the titles. The ROG GR8 II simply adds to this idea in yet another way and will provide the public with another VR option.

Razer has always been a big name in gaming - whether in terms of mice, laptops and virtually everything else - and at CES 2017, the company proved this even more with Project Valerie and Project Ariana.

Despite the amazing graphics and the intense gameplay, there's always something that's lacking when you play these games- and that's immersion. And what better way to dive deep into the game than letting go of the controller and go virtual in the full version of the 2019 game- Into the Radius.