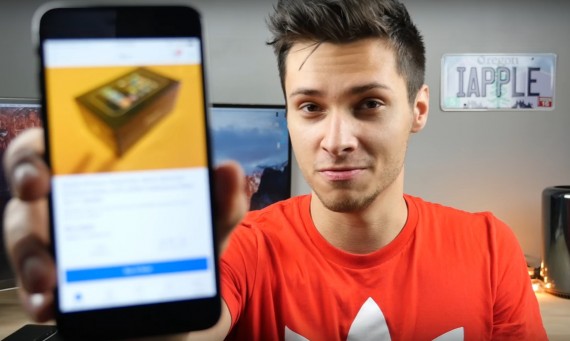 A YouTube channel that goes by the name EverythingApplePro purchased an "original sealed iPhone 2G 8GB' at eBay for $5,400 on which he did not know was actually fake – according to his claims. (Photo : EverythingApplePro/YouTube)

January 10, 2016 marked the celebration of the iPhone's 10th anniversary. And if you were an iPhone fan or an Apple fan in general, what would you do to show your appreciation and join in the celebration?

How It All Started

Last December 31, 2016, a well-known and respected YouTube channel named EverythingApplePro that has around 3 million subscribers uploaded a video on YouTube. On that video, the owner showed his viewers how he was about to pay $5,400 on Ebay for an "original sealed iPhone" - specifically the iPhone 2G 8GB (aka Apple iPhone 1 or iPhone A1203). And according to him, the reason as to why he was doing it was because his Twitter followers encouraged him to do it.

Two weeks later (fast forward to January 15, 2017), he posted another video online of him telling his viewers that he got scammed and how he found out about it through an X-ray scan. Given how excited he was, he wanted to know what was inside the box and according to him, "I thought it would be a fun little project just to see what's inside the box - maybe even if it was fake or not." Luckily, he has this friend who works as an electronic technician and has a half a million dollar X-ray machine at his workplace. There, he found out the hard cold truth...

The X-ray machine gave him a very accurate result of what was in the package. Inside were 3 discrepancies compared to an original iPhone 2G sealed box. First, the power adaptor was sitting sideways, giving it no room for the device to shake or move. Second, the iPhone was placed in backward. And the final one, there was no USB cable inside.

He also found out online that there was a quick and easier way to find out if the package was fake or not. The quickest way is just to do a scan of the IMEI on Apple's hardware check and it will basically say activate your iPhone - that is if the iPhone has never been used. On his case, however, it did not say those magic words which confirmed the reality of it all.

He sent a message to the seller regarding the product. According to the seller, the box was with him since 2007 and bought it himself at an AT & T store. But after a while of exchanging messages back and forth, the seller started to change his story by saying that he bought it from someone else and it wasn't his fault because he didn't know it was actually fake.

As of now, based on the video he last uploaded, the buyer is trying to get in touch with eBay and hoping that he will get a return from what he purchased. Hopefully, everything will work out fine between the buyer, the seller, and eBay.

Can The Nokia 6 Outperform The iPhone 7 Plus?

The long lost king of phones has finally made a comeback with its first release, the Nokia 6. However, despite the high anticipation by fans for the return of Nokia, many find the Nokia 6 a little underwhelming.

Apple Wants Hollywood Status:Plans To Launch Shows Like 'Westworld' And 'Stranger Things' By The End Of 2017

Apple is planning to launch an original TV show by the end of 2016. It will be available on the Apple Music which will be bundled with Apple's $9.99 per month subscription service.

Exactly How Many iPhone 8s Will Be Launched In 2017?

Apple will most likely launched 3 iPhone models this year: iPhone 7s, iPhone 7s, and the iPhone 8 as the premium iPhone model of 2017. However, there is also a new leak discovered about a 5-inch display iPhone model.