Be Amazed With The Voyo VBook V3's Specs And Features 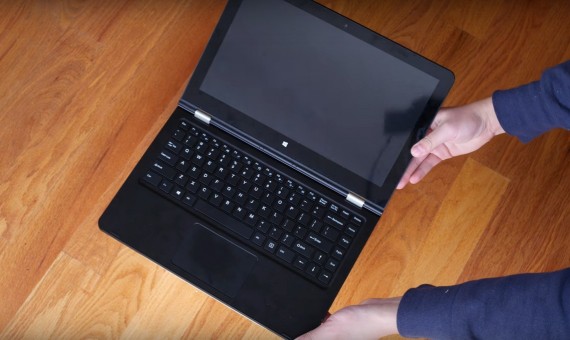 The Voyo Vbook V3 features a 13.3-inch screen with a screen resolution of 1920 x 1080 pixels. It runs on Windows 10 and is packed with the Intel Apollo Lake Pentium N4200 processor. (Photo : Zi Reviews Tech/YouTube)

Are you looking for a powerful laptop on a budget of $400? Then you may want to consider the Voyo Vbook V3 which is essentially both a laptop and a tablet.

When compared to the MacBook Pro, the Voyo Vbook V3 is pretty big and heavy. But the great thing about it though, its design feels solid. And for its outer design, the Voyo Vbook V3 is made up of a soft matte rubber that won't feel like a premium model laptop but doesn't feel cheap either. Perhaps you can say it's in the middle.

At the right side of the Voyo Vbook V3, you will find 2 USB ports, a microSD card slot, and an HDMI port. On the opposite side, you will find the power button, volume button, and the switch to lock the keyboard and track pad.

Speaking about its keyboard and track pad, they have different reviews. For the keyboard, it needs a little bit of force when typing and lacks the premium feel when compared to a MacBook Pro. But hey, it is a $400 laptop, right? Although the track pad is simply great, accuracy and speed are definitely the strong features of this device.

The Voyo Vbook features a 13.3-inch touchscreen with a screen resolution of 1920 x 1080 pixels. Its screen design may seem to be outdated because it has these big bezels surrounding pretty much all 4 side of the screen. Remember the switch to lock the keyboard and track pad located at the left side of the device? Well, there is a use for it, because the Voyo Vbook V3's screen can actually rotate 360 degrees, making it a tablet.

Speaking of tablets, the Voyo Vbook V3's touchscreen sensitivity is great. Though it's is not as sensitive as an iPad, it is decent enough for everyday use

In terms of screen quality, the Voyo Vbook V3's screen is pretty decent in color reproduction and saturation. It is also visible enough for outdoors, but not in direct sunlight. Oh, and one more thing, it has a pre-installed screen protector that you may not want to remove because the Voyo Vbook V3 comes with a stylus pen and could possibly scratch the screen.

The Voyo Vbook V3 runs on Windows 10 and is equipped with Apollo Lake N4200. It has 4 GB of RAM with 128 GB M.2 SSD and a 32 GB eMMC. In terms of software performance, it is fast in opening and closing apps, but you may have to avoid streaming 4k videos on Chrome. And for its gaming performance, the Voyo Vbook V3 was able to play Call of Duty Modern Warfare 3 at 720p and Dota 2 at 1080p smoothly without any lag or whatsoever.

The Voyo Vbook V3 is powered by a 12,000 mAh battery. For its battery performance, the video source was able to get 8 hours of screen-on time which consisted of web browsing such as checking emails and watching YouTube videos.

Overall, the Voyo Vbook V3 specs and features are pretty decent for a $400 laptop/tablet, except for those large bezels around its screen. For me, it is like a waste of space for such a beautiful screen. Other than that, everything is great about this amazing device.

Apple's Macbook Pro has been officially released and it might very well be dubbed as the King of Laptops this 2016.

With the 2016 MacBook Pro to be revealed this October 27 at 6pm GMT, both fans and critics excited about Apple's big reveal.

In order to stay at the top of the freelance market, you'll have to have the best equipment with you to improve your output.