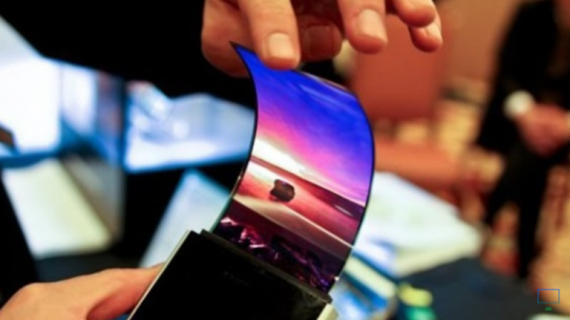 Innovation is definitely expected of the upcoming Microsoft Surface Phone. But a new patent filed by the company indicates a foldable screen feature, which - while not new - has not made mainstream yet. (Photo : CTNtechnologynews/YouTube)

The idea of a foldable smartphone has existed in the market for quite some time, as tech companies have teased the same over and over. Despite this, however, not one unit has been made mainstream yet - it is, until now, an exciting idea but nothing more. But if recently filed patents are to be believed, Microsoft might attempt the same with the upcoming Surface Phone.

The Redmond-based tech giant is currently attempting to patent a device with a flexible hinge and display, MSPowerUser reports. But what is most exciting about the images, is that they indicate a 2-in-1 design. The idea, it seems, is to have a tablet that can fold to a phone at a moment's notice, thereby appealing to a larger part of the public.

As the publication notes, handheld decisions rely a lot on the size of the gadget. Some users would prefer a small device that can be used for calling and texting comfortably. On the other hand, there are individuals who prefer a larger screen in order to browse websites, watch videos and check emails. If the filed patent reaches fruition, users will be able to get the best of both worlds with the Surface Phone.

Reportedly, the device that the tech giant describes is a device that is flexible thanks to its hinge that provides the plurality of housings to each other, as well as to rotate about an axis in relation to one another. However, it also supports a continuous viewing area of the device. All in all, it looks as if there are about two or three screens that can extend flat, or can be maneuvered to form something smaller.

Granted, it is possible that Microsoft is merely playing around with the idea and experimenting whether this is a viable option in the future. As The Verge notes, thousands of patents have been filed without actually seeing the light of a market reveal. However, the publication also adds that the flexible Surface Phone idea was created by Kabir Siddiqui, who is responsible for a lot of Microsoft's recent releases.

Siddiqui is the mind behind Microsoft's Surface kickstand and the Surface camera angle. With this type of history, it makes it more likely that a foldable Surface Phone will be released.

What further adds to the possibility is Microsoft's promise of something more than just a smartphone. CEO Satya Nadella has confirmed that the Surface Phone will be the ultimate device. And while most - if not all - publications assumed this would mean PC-like capabilities, it is only now that the possibility of a 2-in-1 device is really hitting the headlines. Moreover, it is completely possible with Microsoft's history.

The company has experienced overwhelming success in the hybrid section of the tech industry. Its Surface Pro 4, despite more than a year in the market, is still one of the most successful 2-in-1 devices. On the other hand, Microsoft just released the Surface Book i7, which was a bit of an upgrade from the original Surface Pro. Then there is the Surface Studio, which has revolutionized desktops.

It is not unfathomable that the Redmond tech giant has opted to go another 2-in-1 direction, this time with a smartphone twist. The only downside at this point is that a newly filed patent means a few more months until the Surface Phone is actually released. However, a 2017 release date is definitely still possible.

iPhone 7 Plus and Google Pixel XL Specs, Design & Features: The Best Of iOS vs Android

In the latter part of 2016, two of the biggest tech companies released their latest flagships. Apple and Google released some of the best handhelds running on iOS and Android respectively.

Surface Phone Is Not A Windows Phone, Here's The Latest News, Release Date And Specs Rumors

“We will continue to be in the phone market, not as defined by today’s market leaders, but by what it is that we can uniquely do in what is the most ultimate mobile device," Microsoft CEO Satya Nadella said.