Microsoft's Next Masterpiece: The Surface Pro 5 And How It Will Change The Market Landscape 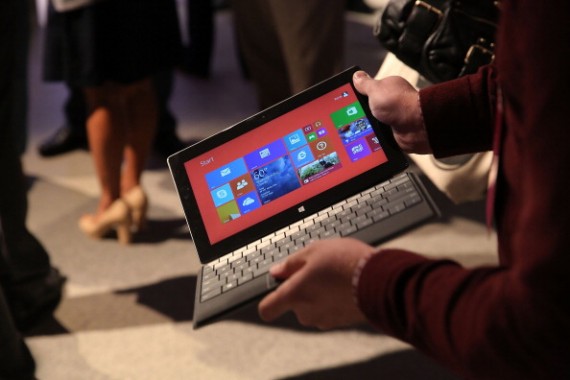 The Microsoft Surface Pro 5 may not sport the same level of a radical redesign that was presented by its predecessor, but this does not mean that the Redmond-based tech giant is sitting pretty on its current offering. (Photo : Spencer Platt/YouTube)

Microsoft's Surface line has generally been a large hit in the tech market and it does not look as if the hype will soon die out. Last year, many expected the release of an all-new Surface Phone and the Surface Pro 5 - the latest generation of the company's successful 2-in-1 devices. However, neither of these products were released, which is why the public is in such high anticipation this 2017.

The Surface Pro 4 has been on the market for over a year now and is still killing it. When it comes to hybrid devices, the Surface Pro 4 is still one of the easiest and most popular choice to make. For this reason - and so much more - the public is expecting so much from the upcoming Surface Pro 5.

Microsoft has not revealed anything official about the speculated device, but there are several rumors surfacing that point to a stellar and very well constructed Surface Pro 5. As Forbes notes, it would be amazing if the device will feature an upgraded 4K screen. But to partner up with this will be updated technology that will improve the accuracy of the touch screen itself, whether with the use of a finger or the Surface Pen.

The Surface Pen itself is also expected to receive an upgrade with the release of the Surface Pro 5. A rechargeable feature for the accessory makes sense, as well as wireless charging feature. However, it likely that the Surface Pen will have more exciting features that could theoretically change the way the tablet has been understood and used.

It is also possible that the Surface Pro 5 will ditch the standard ports and switch entirely to USB Type-C ports. This has been a controversial change - think Apple's latest MacBook Pro - but more and more tech companies are making the switch. It might be the ripe time for Microsoft to do the same.

However, the public may is likely not to get as large a redesign in the Surface Pro 5 as was seen when Microsoft first released the Surface Pro 4, which was released in October 2015. During that release, the tech giant made necessary changes to the hybrid device, most notably the screen that was both physically and digitally larger than the Surface Pro 3. Nevertheless, the upcoming device is sure to showcase Windows 10 in the best possible hardware package.

As IBTimes AU adds, the Windows 10 Creators Update is expected to be released soon. The new OS will allow devices, such as the Surface Pro 5, to be used very much like a PC. Chronologically, the Windows 10 Creators Update is expected for release before the new hybrid device. This way, the public can get a clear understanding of what the software has to offer.

Before The iPhone 8: How Apple Changed The Industry

Ever since the iPhone was first introduced into the market, the face and the uses of a phone have changed. And with the 10th anniversary iPhone on the line this year, Apple is expected to make waves once again.

5 Of The Best Android Nougat Features

Android Nougat is a relatively new addition to the smartphone world. And as an entirely new chapter in the Android books, it comes with an exciting set of new features.