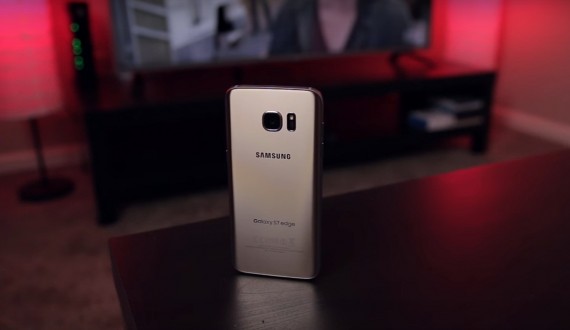 How powerful is the Galaxy S8 against the iPhone 8? Well, here is a list of the potential advantages that the Samsung phone have against Apple's flagship phone. (Photo : Android Authority/YouTube)

The Samsung Galaxy S8 is one of the top upcoming high-end smartphones that is highly anticipated by smartphone lovers. With that being said, tech fans can't help but argue amongst each other as to what upcoming flagship smartphone will likely be crowned as the world's finest smartphone of 2017.

Taking into account the past leaks and rumors about the Samsung Galaxy S8's features, we list what the upcoming flagship offers, that can win consumers over the iPhone 8.

The Galaxy S7 has the best display specs among the 2016 top-tier smartphones. We have also seen two promo videos that feature this new AMOLED technology last month. So if that enhanced AMOLED technology will be featured on the Samsung Galaxy S8, we can assume that this feature will definitely give the Galaxy S8 a big advantage.

The Galaxy S7 has a wireless charging feature, which the iPhone 7 and 7 Plus did not have. If Samsung will take this feature and add it to the Galaxy S8, then it will make it more appealing and futuristic.

The Snapdragon 835 and the Exynos 8895 will be massive. Just with the reported capabilities of the Snapdragon 835 chipset alone, it was pretty amazing that such a device could do and offer so much.

The S Pen is something that is exclusive to the Galaxy Note line. However, there have been rumors since last year that the Galaxy S8 could feature the S Pen. If this true, then it will be something that many will definitely love.

For most people, they find it a little bit annoying if a high-end smartphone does not feature a 3.5 mm headphone jack. Personally, I also share this feeling. Don't get me wrong, wireless headphones are cool, but the thing is, it can easily be lost.

Yes, Apple added a new feature on the iOS 10.3 to locate the AirPods. But what if you accidentally drop those precious little AirPods into a hole and you can't reach them? As for the traditional headphones, that scenario will most likely not happen.

It was kind of disappointing to hear that Samsung chose to delay the unveiling of the Samsung Galaxy S8, because they wanted to do more tests to make sure the device is well-tested. With this being said, we can assume that Samsung is definitely making sure that their device performs perfectly well in real-world usage, which is a good thing.

According to reports, Samsung's AI Bixby will be more powerful than Siri. The digital assistant will be integrated with Samsung Pay, can work with appliances and control apps.

The Galaxy S8 is expected to be released earlier than the iPhone 8. It will be available worldwide on April 21.

The Galaxy versus the iPhone, or in a broader area, the Samsung versus Apple battle has been with us since the advent of smartphones. This is not to discredit what the upcoming iPhone 8 has to offer, which leaks and rumors of upcoming features are nothing short of amazing. The real winner here is the consumers for having two great options and ultimately decide who gets to be the winner. Though, it is obvious I'm betting for Samsung on this one.

Best Features Of The Samsung Galaxy S7 On Android Nougat

Here is a list of the best features that the Samsung Galaxy S7 on Android Nougat offer.

Samsung teases its fans with what could possibly be the Galaxy Tab S3 on its invite for the upcoming Mobile World Congress in Barcelona. Also, reports suggest that Samsung may also unveil a teaser video that highlights the key features of the Samsung Galaxy S8.