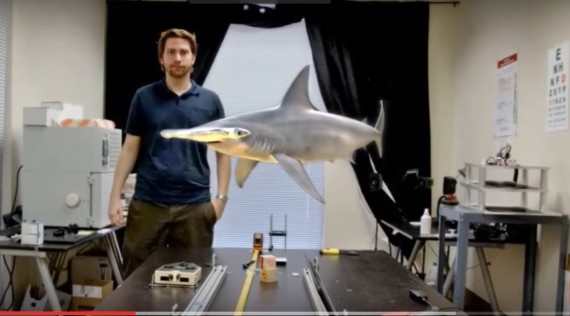 According to Android Headlines, the Magic Leap company has been working for quite some time on an augmented reality prototype. A recently leaked image appears to reveal the interesting bit of hardware that comes with a simple clear casing allowing viewers to see the parts powering the visor attached by a thick cable. In the center, the board features a massive set of heat sinks, sitting on top of the GPU or CPU for the device.

What seems to be a USB port appears on the side of the board. The device is a specially-made desktop PC that resembles recent VR backpack PC's made by HP, but tightly integrated with Magic Leap's proprietary software and hardware. A large battery pack can be seen in the wearer's left hand. Rumors alleged that the device's design had changed significantly since this prototype.

If Magic Leap is working on finalizing a consumer design and the hardware is mostly ready, this would corroborate previous reports that the company is preparing to launch the hardware on the market soon. The prototype hardware was referred by the leaker as "PEQ0." Since the "PEQ" designation is reportedly meaning prototype, the 0 numeration could mean that this prototype is the initial design for prototyping or the very first one produced, which makes sense given the expandable port layout and the clear board.

Magic Leap CEO Rony Abovitz stated in an internal email that was also leaked out that the most recent hardware prototype of the company is the PEQ0b. This is reportedly a third generation model. Abovitz also said that production still has to run up to through PEQ5, illustrating how much design work needs to be done.

The email also promises that Abovitz will soon be publicly presenting a new Magic Leap hardware design prototype that will feature a much smaller design. It is also stated that the new prototype will come with belt straps instead of the backpack seen in the current prototype.

Since the leak of the current hardware prototype of Magic Leap's augmented reality device is basically a backpack, it appears that the gadget is still far behind from expectations and company's promises. According to Gizmodo, former employees of the augmented reality startup were circulating rumors that Magic Leap was way behind on its goals even since December 2016. This new leak appears to confirm that is true.

Rumors claimed that the company is desperately trying to prepare for a board meeting that is scheduled to take place next week. At the meeting, it is expected that an updated prototype will be presented to house the components in belt packs rather than a backpack. However, it seems that one of the biggest issues facing Magic Leap is its inability to shrink down its tech to a size appropriate for a commercial product.

For instance, the first Magic Leap augmented reality prototype was the size of a refrigerator. In order to enable images to have more depth and to look more realistic, it used a projector with a motorized lens. The company plans to commercially release a final product in the form of spectacles, but they will likely use a different kind of lens that cannot offer the same level of depth.

Apple is building up strength of its AR team with hires of former Magic Leap and Oculus engineers.

Why Magic Leap Is The Hottest VR Startup

The secretive startup Magic Leap is working to design the next level in augmented reality.

Smartphones Will Die Soon; Mark Zuckerberg Will Tell You Why And How

Smartphones may be a hot device today but 10 years from now they could become obsolete. Facebook’s Mark Zuckerberg details how he and his company will supersede that technology with AR and VR.

Golden State Warrior and 2015 NBA Finals MVP Andre Iguodala reveals some secret about his favorite tech and the mixed reality Magic Leap that blew his mind.

Car conepts are now being developed using mixed reality in BMW. The car maker combines the best of reality and virtual reality to come up with cool new car ideas and research safety.