HTC U Ultra, U Play Prices Revealed, Soon To Launch In Asia & Europe 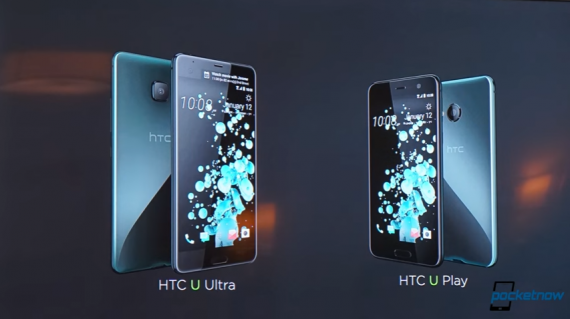 HTC unveiled its new U Ultra and U Play smartphones about a month ago, but was not able to commit to the prices and markets. Fortunately, questions have been answered before the handhelds’ release in March. (Photo : PocketNow/YouTube)

About a month ago, HTC introduced its next generation of smartphones, the U Ultra and U Play, to the world. And while there was already hype about the devices then, the company failed to reveal details about their pricing and could not commit to the release in some markets. Since then, however, the company has gone on the record to fill in the information gaps.

As NDTV Gadgets as reported, both smartphones are already available for order via the company's online store and authorized third-party retailers. Officially, the U Ultra is priced at about GBP 649 and the U Play is priced lower at GBP 399. This roughly translates to about US$800 and US$500 respectively. The price difference between each model is significant and the reason for which is described further below.

Shipment of both models will begin on March 1. More specifically, HTC's president of global sales, Chia-Lin Chang confirmed that shipments to Asia will begin within the week and in parts of Europe by March. However, C|Net reported that the handhelds are physically available in Taiwan, where the company is based.

The biggest selling point of the U Ultra and the U Play is that HTC added a new Sense Companion. This feature is an artificial intelligence-based system that learns a user's daily patterns in order to make its own suggestions. The handhelds also feature HTC USonic earphones, which supposedly analyses and learns the shape of the user's ear in order to provide utmost comfort without sacrificing audio.

Both handhelds also feature a 16 megapixel front camera with UltraPixel Mode and a curved glass design. Straight out of the box, both models will run on Android 7.0 Nougat, which is partnered with the company's Sense UI customization. But beyond these things, there are some notable differences between the U Ultra and the U Play.

For one thing, the U Ultra has a Dual Display, which acts a secondary display. Moreover, it has a 5.7 inch Super LCD display with a 1440 x 2560 pixel resolution. Its secondary display, however, is only 2 inches and has a pixel resolution of 1040 x160. It is powered by a 2.15Hz quad-core Qualcomm Snapdragon processor. The flagship will run on 4GB of RAM, has a 12 megapixel rear camera and a 3000 mAh battery with Quick Charge 3.0 feature. The U Ultra is available in 64Gb and 128 GB offerings.

Meanwhile, the HTC U Play has a smaller 5.2 inch HD display and is available in 3GB RAM/32GB internal storage and 4GB RAM/64GB built in storage options. It is powered by an octa-core MediaTek Helio P10 processor. It also has a smaller 2500 mAh batter.

HTC has a lot riding on the U Ultra and the Up Play as the company has failed to regain its hold of the smartphone market. The likes of Apple and Samsung have proven to be tough competition in the high-end tier of the industry, while Chinese companies have taken a hold of the lower-end market. Nevertheless, the new handhelds from HTC have a lot of potential.

Microsoft is in the midst of processing its next big OS update, dubbed the Creators Update. And while several features are geared towards the more tech-savvy public, some additions will be vital for everyday users.

Leaks indicate that the Google Pixel 2 will look different from the Pixel 2 XL.

A blogger discovered what could be signs that HTC is working on the Google Pixel 2 and Pixel XL 2.