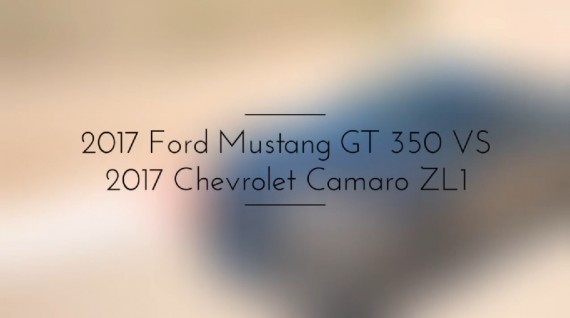 The 2017 Ford Mustang and 2017 Chevrolet Camaro were both designed to be fast and the automakers have certainly succeeded in this regard. According to US News, the base 2017 Ford Mustang is powered by a 3.7-liter V6 that is good for 300 horsepower but you will also have an option for a 310 horsepower 2.3-liter four-cylinder engine for an additional $1,000. If you are not satisfied with these numbers, you can move up to the Mustang GT that has a 5.0-liter V8 that can deliver 435 horsepower and 400-pound-feet of torque.

Accordingly, all Mustangs are paired with a standard six-speed automatic transmission with an option for a six-speed automatic gearbox. If you still don't find the numbers enough, the Mustang GT350 and GT350R are powered by a 5.2-liter V8 engine that dishes out 526 horsepower but there won't be an automatic gearbox for these models any more. With this powertrain, the 2017 Ford Mustang GT350 can go from zero to 60 miles per hour in just 4.3 seconds.

In comparison, is powered by a 2.0-liter four-cylinder engine in the base trim that cranks out 275 horsepower. Just like the Mustang, you can also go for the more powerful configuration of its V6 that is good for 335 horsepower. The 2017 Chevrolet Camaro SS also has a more powerful configuration in its 6.2-liter V8 engine that is good for 455 horsepower. These powertrains are paired with a standard six-speed manual transmission or an eight-speed automatic gearbox depending on your preference.

Now if the Camaro SS is still not fast enough for you, the 2017 Chevrolet Camaro ZL1 will probably hit the spot as a 6.2-liter supercharged engine with 650 horsepower powers it. This allows the 2017 Chevrolet Camaro ZL1 to go from zero to 60 in 3.5 seconds. The ZL1 also offers an exclusive 10-speed automatic transmission if the manual gearbox does not strike your fancy.

People buy these legendary cars not just because they are powerful but because they are also stunningly gorgeous. The latter however, is basically just a pot sweetener for many people. It is undeniable that both the 2017 Ford Mustang and 2017 Chevrolet Camaro are gorgeously unique in their own ways.

According to The Car Connection, the 2017 Ford Mustang sports a graceful look while the 2017 Chevrolet Camaro features a menacing appearance. Of course, we cannot leave out the factor that beauty is in the eye of the beholder and with that being said, you will have a beautifully powerful car whichever one you choose.

The 2018 Ford Expedition's powertrain specs were unexpectedly leaked through a Canadian consumer website.

Here's what you should know if you are torn between the 2017 Subaru Outback and the 2017 Volkswagen Golf Alltrack.

The 2017 Ford Fusion brings back excitement as the fastest in the midsize sedan segment.

Automated driving has been something countless companies have been trying to perfect but no one has got it right yet. Could Ford be the first?