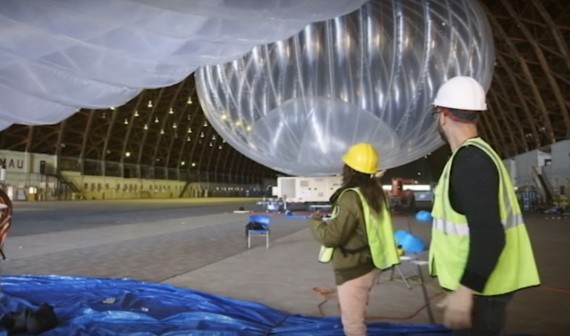 Alphabet's Google decided to change its internet balloons project. Thanks to a machine learning breakthrough, it moves now to a new direction. (Photo : The Verge / YouTube)

Alphabet changed its internet balloons project initially planned to cover the Earth with balloons that beam the internet to the ground. Thanks to a machine learning breakthrough, the navigation of these internet balloons can be controlled so well that just a few of them will be enough to concentrate in areas of need.

Alphabet's internet balloons project is called Project Loon. The original plan looked similar to the way mobile phones connect to cellular towers. It was envisioning a constant stream of balloons always moving over us at an altitude of 20 kilometers in order to allow devices on the ground to stay connected.

According to The Verge, Astro Teller, the head of the company's experimental wing, announced on Thursday, Feb. 16, that through a machine learning breakthrough, the Loon team has learned how to control the navigation of these internet balloons. The team can now exercise more control over where the balloons stay, and where they go.

The smart software algorithms can control balloons as they navigate the globe so that the balloons can cluster in certain areas for months at a time. This breakthrough changes the way the Project Loon will work in order to provide balloon-powered internet for remote areas around the globe. The total number of balloons needed for the project will be reduced by taking a more targeted approach.

From hundreds of balloons required by the original form of the Project Loon, only a dozen will be needed now. The time required to move those balloons to specific coverage areas will be reduced as well, according to Teller. The new approach will also increase the chance of the project becoming profitable by helping the company to get greater value out of each balloon.

The profitability of the project might be the most important factor since Alphabet has already lost billions of dollars on other projects. Under the company's chief financial officer Ruth Porat and profit and cost have become very important. When she was brought on board last year, one of her most important tasks was to reign in spending on experimental projects that were running on a deficit by not making money.

Taking into consideration the profitability, the new direction of the Project Loon guarantees that the idea could stay afloat for a while longer. A small number of balloons will be launched into particular regions that need internet access, rather than building a worldwide network. This new approach will accelerate the project's path toward becoming an actual commercial operation.

According to Bloomberg, Teller said that the Loon team can now run an experiment with just 10 to 30 balloons. This way, the costs are much reduced and the service has a better chance of becoming profitable. Teller also said that in the coming months the team will start testing with telecommunications providers.

SpaceX has filed with FCC on Tuesday, Nov. 15, a request for approval of its plan to deploy a fast global internet satellite network.

Facebook has announced that it successfully completed the first test of its giant Aquila internet drone.

Currently, Waze Carpool isn’t making any money. The app charges riders based on on the cost of gas for a certain ride, while the driver gets everything. In the future, Waze Carpool could also take a commission.

Google has pulled the plug on Project Skybender, a solar drone supposed to bring internet connection to remote areas around the world.