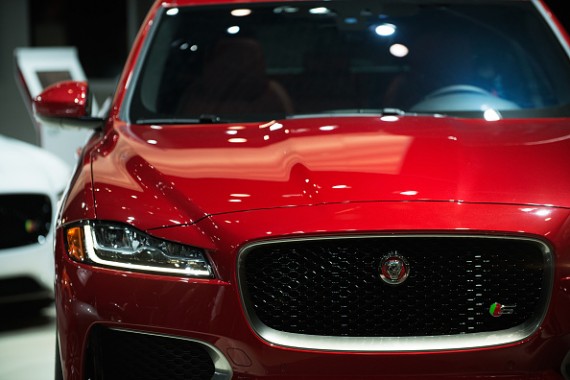 NEW YORK, NY - MARCH 23: The Jaguar F-Pace is introduced at the New York International Auto Show at the Javits Center on March 23, 2016 in New York City. The F-Pace is Jaguar's first SUV and was released alongside the 567 horsepower luxury sports car, the Jaguar F-Type SVR. (Photo : Bryan Thomas/Getty Images)

The auto industry, much like every other tech industry, is always changing. There is a need to roll with the times as developments and research are made in the field, a move which not only keeps companies relevant but keeps customers interested as well. And this is exactly why Jaguar has just updated its XE, XF and F-Pace models, which are now available with a powerful engine and equipped with better safety and security features.

According to Financial Express, the biggest update that was made to the XE, XF and F-Pace models is that their current Inline four-cylinder engines were replaced. Instead, Jaguar has loaded up the same with a new Ingenium four-cylinder engine. But only the F-Pace received a new E-Performance diesel unit.

Nevertheless, all three models getting the Ingenium four-cylinder is significant on its own. It is a turbocharged 2.0-litre petrol engine with two states of tine, 197 hp and 247 hp. There is also a 2.0 liter Ingenium twin turbo diesel engine that performs at 500 Nmm of torque and 237 hp. However, Jaguar took the opportunity to also include and improve on the existing features of the cars. KBB has reported that the new engine benefits from Continuously Variable Lift technology, as well as a higher-pressure direct-inject, a new twin-scroll turbo and Jaguar's first-ever integrated intake/exhaust manifold.

A new petrol version has been added to the XE range, the Jaguar XE S. It is powered by the 2.0 liter Ingenium patron engine, which is estimated to deliver about 375 hp. It is also fitted with Configurable Dynamics, which has a gesture-controlled boot lid.

Meanwhile, the XF is available in three new engine options. Specifically, these options are the 2.0-litre petrol and diesel Ingenium units and a 2.0-litre petrol engine, which develops 197 hp and is paired to an automatic gearbox and powers the rear wheels. The third and final option is the 2.0-litre petrol unit that makes 247 hp and has an all-wheel-drive system

The Jaguar XE and XF sedans were fitted with extra safety equipment. This addition includes the Forward Traffic Detection feature and the Forward Vehicle Guidance feature, which are available on the company's Surround Camera System and the Advanced Driver Assistance Systems. The XE is also receiving a 12.3 inch TFT instrument cluster with navigation.

Moreover, Jaguar has announced the development of a new app, which is sure to make use of the new models even more efficient. The app allows users to pay for their fuel from the vehicle's built-in touch screen via Apple Pay, Android Pay or PayPal. At this point, the application has only been announced for Shell fuel stations and will be available first in the UK later this year.

Tesla is a growing a market in the auto industry, which offers a range of electric vehicles that have grown in popularity in the United States. But the company has not put a foot inside the UAE.

Sooner or later, electric cars will be the norm and this means that auto companies will need to step up in their EV car offerings. Fortunately, the BMW X5 and the Volvo XC90 are filling in for the SUVs.

2018 Toyota RAV4 Adventure: A Practical Choice For An Active Lifestyle

Toyota takes its line of Adventure cars to the next level with the 2018 RAV4 Adventure, which is arguably not the best off-road vehicle, but it still does pack a punch.

The leaked images reveal the fact that the new Jaguar E-Pace crossover will indeed have a rear end. It largely resembles the bigger F-Pace crossover, well, apart from a few subtle differences.