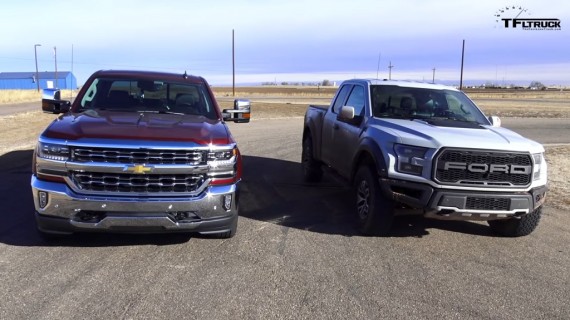 We already know that the 2017 Ford F-150 Raptor is the undisputed king in the pickup truck segment. Every champion however, has a lot of challengers that are constantly looking to dethrone it. The 2017 Chevrolet Silverado is one of those challengers. That being said, many of us wonder what happens when the 2017 Ford F-150 Raptor meets the 2017 Chevrolet Silverado in a battle for truck supremacy.

The 2017 Chevrolet Silverado is actually one of the most worthy contender to go up against the 2017 Ford F-150 Raptor. As noted, the 2017 Silverado has three options for its powertrain. A 4.3-liter V6 engine that delivers 285 horsepower powers the base Silverado. The other engine is a 5.3-liter V8 that can put out 355 horsepower. On the top sits a 6.2-liter V8 that dishes out 420 horsepower and 460 pound-feet of torque.

As far as off-road performance goes, both pickup trucks are available with four-wheel drive (4WD) configuration and the 2017 Ford F-150 is considered to be a beast in this aspect. Apparently, the 2017 Chevrolet Silverado's suspension system is a bit on the soft and bouncy side according to most consumers. That's another two points for the 2017 Ford F-150 Raptor.

Other points of consideration include safety, comfort and interior refinement along with interior technology. The 2017 Ford F-150 Raptor comes out on top in the first two while the 2017 Chevrolet Silverado gets the last one as it packs a lot more features in terms of technology.

Cargo space, hauling and towing are also among those that need to be scoped out and just like the first three, the 2017 Ford F-150 Raptor gets the first two while the 2017 Chevrolet Silverado gets the last one. The final factors to be taken into consideration are tprices and reliability. In these aspects however, the 2017 Ford F-150 and 2017 Chevrolet Silverado ended up in a stalemate.

Honda will finally show a production version of the 2018 Civic Type R at the 2017 Geneva Motor Show.