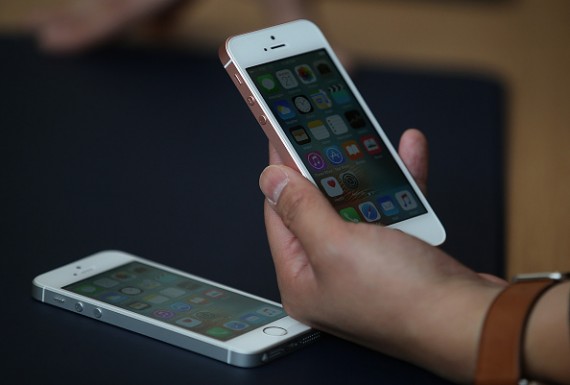 CUPERTINO, CA - MARCH 21: An attendee inpsects the new iPhone SE during an Apple special event at the Apple headquarters on March 21, 2016 in Cupertino, California. Apple announced the iPhone SE and a 9.7' version of the iPad Pro. (Photo : Justin Sullivan/Getty Images)

As long as iOS has banned the download of certain applications, there has been the process of jailbreaking to get around these restrictions. Apple has likewise been battling these advances and has seemingly gotten the upper hand with its latest operating system updates. But despite the lack of information from Luca Todesco and Pangu, there are possible alternatives.

The purpose of jailbreaking is mainly to acquire access to applications that are otherwise not available on iOS devices but are available for Android units. It definitely has its risks, but some hacking parties have made the process easy and available in the past. As such, thousands of individuals have opted to jailbreak their iOS handhelds.

Likewise, Apple has tried to mitigate these jailbreaking activities by releasing iOS updates. But until recently, Todesco and Pangu were still able to break through the security features. Nevertheless, the Cupertino-based tech giant seems to have the upper hand at this point, as Todesco has announced an upcoming hiatus and Pangu has remained silent since iOS 10 rolled out.

As noted by Tech Times, Todesco's Yalu102 jailbreaking tool is still in its beta stage. Those who have accepted the risk and joined the beta testing confirmed that there are a lot of bugs that still need fixing, which is understandable as it has not been removed from the testing stage. But when Yalu102 is finalized and ready for mass use, the Italian hacker will remove himself from the jailbreaking community for a while.

In a series of Tweets, Todesco made it clear that he would stop public iOS research after the iOS 10.2 tool. "The idiocy of the jailbreak community is too much to handle for me," he said. And while public research will no longer be on the table, Todesco admitted that his own private research will still continue.

Then there is Pangu, the famed hacking group that has virtually disappeared from the jailbreaking community. Many have reasoned that Pangu is simply looking for the perfect time to release its tool, but others have argued that it just cannot break through Apple's current security measures. Until the event that Pangu actually releases an iOS 10 jailbreaking tool, if the public is ever graced with the same, the status will remain a mystery.

But there are other alternatives to jailbreaking, as MacWorld has reported. Kodi, for example, can still be installed on an iOS device that has not been jailbroken. The steps are relatively simple, although arguably more tedious than the standard jailbreak. The first step is to plug in the iOS device to a Mac and open Xcode.

Afterward, select "Create a new Xcode project," then "Single View Application," then "Next." Then the user must fill in the "Project Name" and "Organization Identifier" and then hit "Next" again. After saving to desktop, the next step is to click on "Create" and choose whether or not Kodi will be allowed access to contacts.

Subsequently, the user should click "Fix Issue" and the "Add" on the next dialog box, where the signing in is then required. Click "Choose" and open the App Singer. Click on "Browse" and find the Kodi deb file and then press on "Open." Select the profile with the identifier that was earlier set. Then add Kodi as an app display name. Click "Start," choose a file name and then click "Save."

After that, go back to Xcode and select "Window," then "Devices." The device should be on the left-hand plane and clicked. The plus sign should then be found in the right-hand pane and then pressed. Select the .ipa file that the iOS App Signer had generated earlier and then click "Open." Then just unplug the device and unlock the same.

Microsoft is reportedly working on a refresh for Windows 10, which will roll out later this year and will help developers customize the appearance of universal applications.

The Razer Blade, arguably one of the best gaming laptops that runs on Windows 10, has just been announced for an upgrade. The company is making the 14 inch laptop more powerful and more beautiful.

Hackers Are Using Movie Subtitles To Access Your Computers

Hackers have found a way to insert malicious files into movie subtitles that will let them take control of computers and smart TVs.

Recent data revealed that iOS 10 outperformed its predecessors with regards to user adaptation.