Elon Musk Confirms Model 3 Backlogs Will Be Finished By 2018 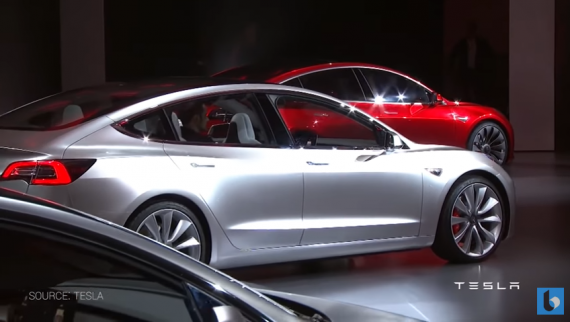 The world is watching Tesla as it tries to deliver on its promises for a mass produced electric car that is both efficient and affordable. Despite doubts, CEO Elon Musk has stuck by his initial promises. (Photo : TechnoBuffalo/YouTube)

Tesla has been working under the watchful eye of the public as it is slated to start production on its Model 3 line. There is a lot of pressure for the company to deliver on its promises, especially because its shipment history is less than stellar. Despite the doubts, however, CEO Elon Musk has stayed and continues to stay true to his earlier statements.

The latest quarterly earnings call of Tesla just recently wrapped up and Musk had a few interesting claims to make as to how the future of Tesla will be. According to AutoCar, Musk told investors that the company will begin to produce 5,000 units of the Model 3 per week by the end of 2017. Moreover, he claimed that this number will rise to 10,000 units a week sometime in 2018.

that the Model S and Model X demand will begin to saturate at that point and that only some 100,000 units of these will be made and ordered for 2018. Theoretically, about 400,000 units will be for the Model 3. With Musk's new claims, it is possible.

However, this is only under the presumption that there has not been a dramatic increase in reservations for the Model 3, which cannot be said for sure as Musk declined to update the number. "People read too much into it," he said during the call. He also confirmed that buyers who want to make the US$1000 deposit for a unit still can. Likewise, those that did sign up and would like to remove themselves from the list can get their money back as well.

In the call, Musk also brought up the possibility of looking to raise capital in order to reduce the risk for investors. "According to our financial plan, no capita needs to be raised for the Model 3," he said. But we get very close to the edge." He then went on to clarify that it is just an option at this point, but that it is a likely one that the company will take.

He then clarified that the Model 3 is scheduled to be delivered beginning in July, as initially promised. However, there will only be a handful of units at that time. It will be in September when the company will ramp up its production of the electric sedan. And while no official number was produced for the Model 3, Musk did say that Tesla has a goal of 47,000 Model S and Model X units.

Musk also used the conference call to reiterate one of Tesla's most drastic promises. That is, that 500,000 electric vehicles will be produced and delivered by 2018. Moreover, 1 million units will be delivered in 2020, thanks to the Gigafactory working at full capacity. If the company manages to pull these numbers off, it will be a great feat as only 60,000 units were reported for 2016.

Tesla does not have the cleanest track record when it comes to meeting its target delivery dates. But for the Model 3, its most in demand vehicle, the company seems to be exceeding expectations.

At this point in time, the idea of long range driving an electric vehicle seems farfetched and expensive. But if Tesla wants to change this idea by lowering the battery costs and it is slowly become a reality.

Tesla may already have a few things against it this year, but the company is not going to let anything deter its delivery schedule of the Model 3 - not even a union threat.