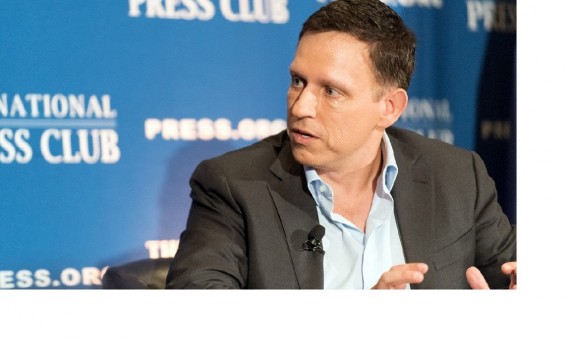 Considering that Peter Thiel´s company helped to develop NSA´s spy program, it remains unknown how could the relationship between the Silicon Valley and Donald Trump´s administration prosper from now on. (Photo : National Press Club Live/YouTube)

According to Snowden´s information, Thiel´s company sold its services to the NSA and even streamlined a huge trove of surveillance data. In fact, it was revealed that Palantir also helped to create a visual mapping software for the cyber weapon, which would allow people using this surveillance programme in order to determine social connections and even ideological grouping, by just examining people´s online activities, including monitoring any social media account.

As you might see, the implications of this particular issue could be really devastating for Peter Thiel and Trump´s administration, given the fact that Snowden´s documents revealed the way in which the tech entrepreneur played a major role in Xkeyscore development. Naturally, this means that he´s participating in a cyber weapon that represent a gigantic threat to privacy, which is something that would definitely creates a lot of criticisms towards his image and the U.S. presidency.

According to several reports, the NSA´s programme is probably the most invasive surveillance tool, and is actually capable of intercepting a wide array of communications and other information. What seems to be quite frightening about Xkeyscore, is that this programme has collected data including chats, emails, documents, pictures, webcam photos, web searches, botnet traffic, voice calls and many more.

Peter Thiel´s Company Has Already Been Used By Several Governments

Although this is something quite surprising for a Silicon Valley company, the truth is that Thiel´s Palantir has already been in the spotlight for these kinds of controversial service to intelligent agancies, given the fact that CIA´s venture capital arm In-Q-Tel was an early investor in this company. Nevertheless, even when Palantir has been described as a relatively new Silicon Valley startup sponsored by the CIA, there wasn't any report showing its involvement with an intelligence agency like the NSA.

One of the most concerning things about Peter Thiel´s company is that it has always been characterized for having great relations with many governments around the world.  It is noteworthy that some members of the "Five Eyes" spy alliance between the U.K., Australia, Canada, the U.S. and New Zealand were making use of Palantir to help collect and process information from around the world.

Another important detail of this company is that it secured over $1 billion in federal government contracts in the past few years, and that it remains reluctant to disclose anything about its clients and the nature of the worked involved. Now that Peter Thiel is on Donald Trump´s team, it wouldn´t be a surprise if his administration becomes the main customer of his company, and could easily get access to NSA´s spy programme in order to monitor any person in the world.

Apple Could Finally Conquer The Chinese Market This Year

Despite the fact that Apple´s recent numbers in China have been surprisingly outstanding, there´s a key element that could make the Cupertino company conquer the Chinese market and beat its competitors.

Microsoft announced it has already patched vulnerabilities reported in Friday’s high-profile leak of suspected U.S. NSA spying tools. This means that customers should be protected if they’ve kept their software up-to-date.

NSA reportedly has its powerful spy tools leaked online. The spy tools could be used to hack any vulnerabilities present in Windows and could be potentially damaging.