Is Estonia World's Most High-Tech Nation? 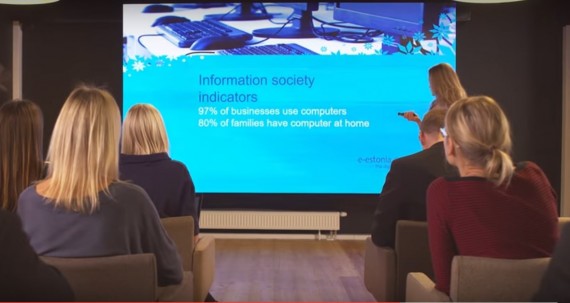 According to analysts, Estonia has become the world's most pro-tech nation. (Photo : e-Estonia / YouTube)

With no major economic engine, no natural resources and a population of only 1.3 million, Estonia, a country located into the northeastern corner of Europe, found its vocation in becoming the world's most high-tech nation. The government has carefully cultivated the Estonian ecosystem in order to radically embrace the future.

The world's most enthusiastically pro-tech nation is seizing the possibilities offered by this age of networked computing in order to overcome its remote location and become part of a global economy. Estonia is also increasingly standing out by opening its borders in an age when many other countries are withdrawing into themselves. The country is being transformed by aggressive bets on the future.

One of the country's facilitators for high-tech startups is the Lift99 coworking space for startups located in the Telliskivi Creative City (Telliskivi Loomelinnak). Lift99 was found in 2010 by five Estonian startup entrepreneurs. Among them is Ragnar Sass, a serial entrepreneur who also cofounded CRM platform Pipedrive that raised $31.2 million.

The former Garage 48 has gone through a full makeover, pushing for bigger and better results. It moved to a new inspiring setting in Telliskivi Creative City, where is attracting more innovative and entrepreneurial spirit than ever before.

The former railway and factory center also features the headquarters for crowdfunding financing platform Funderbeam. Having raised $2.6 million last year, Funderbeam has become one of the top names in the Estonian startup scene. Another startup located there is Testlio, a QA testing platform that raised over $7 million.

These startups are surrounded by artists' cooperatives, trendy restaurants and a range of other small businesses both digital and analogue. The place looks like someone transported a few blocks of San Francisco's South of Market district in the Baltics. Telliskivi Creative City's startups are part of a growing community of 400 startups that have been getting increasing international attention. The Estonian government has sponsored an initiative to catalyze the nation's startup economy that is building a global service.

According to Venture Beat, under its e-Estonia initiative, the Estonian government has become an incubator for programs pioneering advances in education, virtual business, security and digital citizenship. The country has made progress with many of its e-Estonia initiatives, particularly its e-Residency program that allows anyone to become an official resident of Estonia without having to move there.

E-Residents receive an identification card that can be used to access government services to open a bank account or to set up a company without ever needing to visit the country. The digital ID contains a chip that uses 2048-bit public key encryption. Since the e-Residency program was launched in 2014, the e-Residents have launched 1,000 new companies based in Estonia.