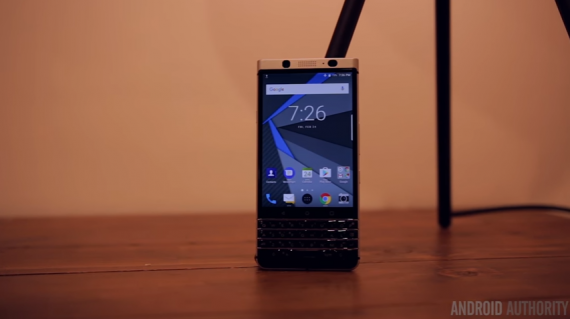 The Mobile World Congress 2017 is already shaping up to be one of the most memorable in its history as TCL and BlackBerry unveiled the BlackBerry KeyOne said to put both companies back on the smartphone map. (Photo : Android Authority/YouTube)

For years now, the Mobile World Congress has been the avenue for tech companies to announce their latest releases. This year's event started off with a bang as TCL and BlackBerry announced the BlackBerry KeyOne, their latest release into the smartphone world. The unit, with a lineup of high-end specs and notable features, might just be what the company needs to return to the industry with a bang.

There has actually been a lot of hype surrounding the device before it was officially announced. Several reports on the same have been released, but it was under the "BlackBerry Mercury" codename at the time, as noted by The Verge. The publication continued to say that the KeyOne is undoubtedly the best release from the company ever since TCL started licensing the name.

Arguably, the bar has not been set so high. But the new release from TCL and BlackBerry is still a notable one. It is attractive with its solid fit and finish, molded together from aluminum and covered in Gorilla Glass 4 at the front. The 4.5 inch LCD screen has a 3:2 aspect ratio and a solution of 1620 x 1080. The camera is set on 12 megapixels and uses a Sony sensor with 1.55-micron pixels.

The KeyOne is powered by Qualcomm's Snapdragon 625 processor, which is definitely not the fastest and most powerful that is available in the market. However, the publication argued that it is still likely to be one of the longest-lasting handhelds in the market. Its 3505mAh battery is sure to last the entire day no matter how much use it goes, though. And oddly enough, the less powerful processor is also to be thanked for this.

The new flagship will run on Android 7.1 straight out of the box and BlackBerry has committed to using Google's monthly security patches. However, users can expect some older mainstays to be still available. This includes BBM and BlackBerry Hub. It also comes fitted with BlackBerry DTEK, a software that is pre-loaded on TCL's devise. It monitors the phone's status, analyzes how secure it is and provides granular control over how services are able to use their functions.

Arguably, the most notable feature, however, is the physical keyboard. It sits snuggly below the screen and is very reminiscent of the keyboard from the BlackBerry Priv. It is touch sensitive and responds to swipes, much like a touchscreen so users will be able to easily scroll down and up. Each accessible key can also be assigned as a shortcut for different applications. Users can also just type to automatically search on google. The space bar also doubles as a fingerprint sensor.

As Trusted Reviews has reported, the BlackBerry KeyOne is a return to form, as the best features of older generations have come together. It has all the potential to turn the company back to the mainstream market, especially for those who are focused on security. However, it all depends on whether or not the market is ready or willing to make a return to the physical keyboard.

The Mobile World Congress has been a staple in the annual calendars of some of the biggest names in mobile and technology. This year, several handhelds are expected to debut at the event, which will be held in Barcelona from February 27 - March 2.