The night sky will be lit up as two meteor showers will light up the night sky this week.

According to AccuWeather, the Draconid meteor shower will peak on Tuesday night, October 8, to Wednesday morning, October 9.

The Draconid is a minor meteor shower with only ten meteors per hour. But, it peaks before midnight, and it can occasionally fill the night sky with hundreds of meteors. 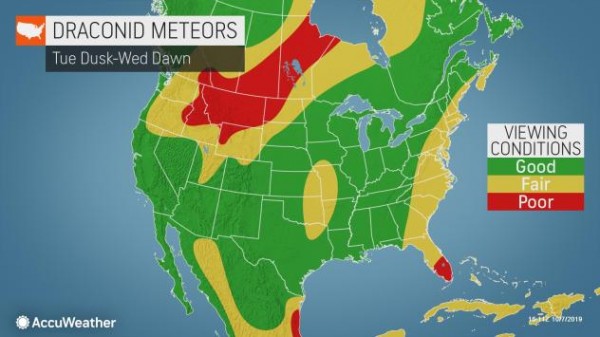 (Photo : AccuWeather)
Two Meteor Showers are Coming This Week Plus How to Best Watch Them

Most meteor showers peak a few hours before dawn. However, Draconid his best viewed when it is still closer to nightfall as per CNET. You can wait for the meteor shower with the kids as it will likely fall in between dinner and bedtime.

Unfortunately, stargazers won't be able to see that much for the duration of the Draconid meteor shower since the moon is high in the sky at midnight. The best way to check some meteors is to look at the areas away from the bright moon. And in order to avoid the moon at midnight, it is best to watch the meteor shower early at night or near dawn.

On the other hand, Southern Taurids will follow the Draconid meteor shower. It will peak on Wednesday night, October 9, to Thursday, October 10. 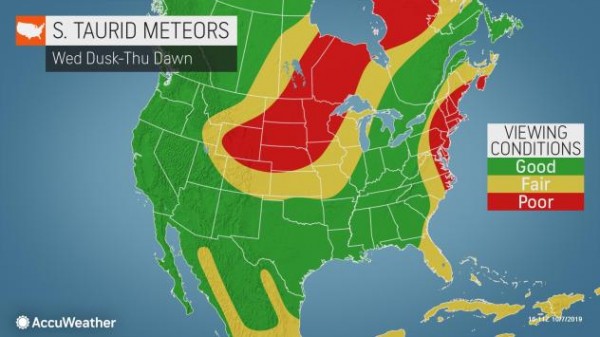 (Photo : AccuWeather)
Two Meteor Showers are Coming This Week Plus How to Best Watch Them

Some experts predict that we could or possibly see a small outburst of the Draconids like it did last year when it produced 150 meteors in an hour, according to the International Meteor Organization.

Like with the Draconid meteor shower, the Southern Taurids is a minor shower, with an average of ten meteors per hour, even on maximum activity.

However, many stargazers are awaiting the Southern Taurids as it is "rich in fireballs" and responsible for several fireball reports, especially from September to November, says the American Meteor Society.

These fireballs are meteors that are incredibly bright that they even leave a shadow on the ground.

RELATED TOPIC: NASA Chief Scientist Predicts Life on Mars; Earth Not Yet Prepared for the Results

The Draconids meteor shower can be seen around the world at its peak.

Additionally, much of the US will be cloud-free, so it will be easier to see the Draconid meteors. However, for those in the East Coast and the northwestern states, the sky will be cloudy, and it can block your view of the night sky.

Meanwhile, the best way to view the Southern Taurids fireballs is to stay up later at midnight, according to Mike Shanahan, director of Jersey City's Liberty Science Center.

There are some years where "meteor storms" occur. Unfortunately, there aren't any predicted meteor storms happening this year.

On the other hand, another meteor shower will be on its peak this October 21 to October 22. The Orionid meteor shower is a lot more active, with an average of 20 meteors an hour. The brightest stars will also come back to our night sky later this month.