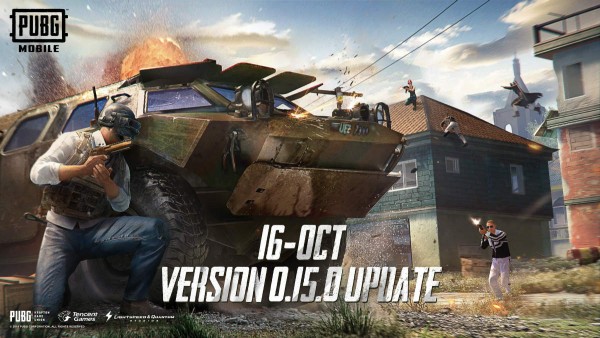 Today, PUBG Mobile is getting an update to version 0.15.0, which is rumored to add functions and features that will elevate the gaming experience of its users.

In fact, the official social media pages of the popular battle royale game have been teasing what seems to be the new features that will be coming to the game - such as the new BRDM-2 vehicle and the ledge grab mechanics, to name a few.

Other functions are also added; all of which are a supposed attempt to subdue the heat PUBG Mobile is facing after Call of Duty: Mobile has successfully surpassed 100 million downloads in just a week.

To say the least, the competition is getting hotter day by day as Fornite, PUBG Mobile, and COD Mobile compete to be the best shooting mobile game ever created. On that note, let's take a closer look at the newest changes in PUBG Mobile version 0.15.0 to keep up with its competitors.

With the new update, PUBG Mobile is getting a new Payload Mode, which will enable users to fly a helicopter and engage with enemies from the air just like how they can on land. In addition to this, players can now revive their fallen team members; the surviving member should pick up their ID cards and go to the communication tower to be able to bring teammates back to life.

Moreover, the iconic Desert Eagle will be making its way to PUBG Mobile as well. It is anticipated to be the only pistol that can inflict maximum damage with its high bullet speed. The gun will be using .45 caliber rounds with an estimated damage point of 62. It will be compatible with scopes, like the red dot, holographic, and laser, as well as additional pistol magazine fittings.

Superweapon crates are going to be seen all throughout the game as well. These crates will spawn every three minutes and contain airdrop weapons, level 3 armor, and new payload mode weapons. These crates can give you the firepower you need to shoot down a helicopter since players can now exchange bullets regardless if you're on land or in mid-air.

The most surprising change, however, is the new function that gives players the ability to call in an airstrike over hostile territory. This will help eradicate a large number of enemies almost instantaneously.

Instead of the armored UAZ, PUBG Mobile will now have the BDRM-2. The new vehicle can be used on different terrains, both on land and in water. In addition, the tires of the BDRM-2 are bulletproof, offering a longer lifespan compared to other vehicles; however, we are yet to see whether it spawns the same way armored UAZ does.

A vehicle repair pack is now available in the game as well. With the pack, players can repair the damages on any vehicle. There's no longer a need to hustle and find a new vehicle throughout the map since you can pretty much just fix a damaged one nearby if you have a vehicle repair pack.

Coming in with the new update, players will now be able to hop on to buildings and climb on ledges mid-air. This new function will also be giving players access to areas that have been unexplored and inaccessible in the past.

The mechanics to the new ledge grab function is pretty easy; all you have to do is tap on the jump button twice to make it work. Timing, however, will be the tricky part this new function.

In the new update, some improvements are made to Survive Till Dawn as well. The mini-game was redecorated to celebrate the festivities of the Halloween season. These changes are reflected in "Halloweenized" skyboxes, background objects, and monsters.

Aside from this, hostile human factions were also added. These factions are located in abandoned factories and other strongholds. Rewards will be given to players who can defeat them.

Special bio-warfare equipment is also added to the mini-game. The said equipment is rumored to be effective against zombies and other players; however, getting your hands on it can rather be difficult for it randomly spawns after killing a zombie.

Related Article: 5 of the Best Android Mobile Games Everyone Can Enjoy for Free