Roku announced Tuesday, October 15, that the Apple TV app is finally available on the platform via the Roku Channel Store for the first time ever.

The Apple TV App allows you to discover more than 100,000 movies and TV shows available on the streaming service, subscribe to Apple TV channels directly from the platform, as well as access content you have bought from iTunes.

Besides the Apple TV App, fans can also access original Apple movies and TV series starting on November 1 with the launch of the Apple TV+, which will be available within the Apple TV App and enabling users to subscribe to the services offered within the app such as HBO and Showtime for $4.99, according to Macworld.

However, not everyone who has a Roku device can enjoy Apple TV App and Apple TV+.

Those who own the older Roku models won't be able to get Apple TV App, and even Netflix will stop bringing its service to the Classic Roku devices due to "technical limitations," so it is likely that it is the same reason Classic Roku owners can't get Apple TV.

To know whether your device is compatible with Apple's streaming service, head over to your Roku device's home screen, select "Settings," then "System," and click on "About." 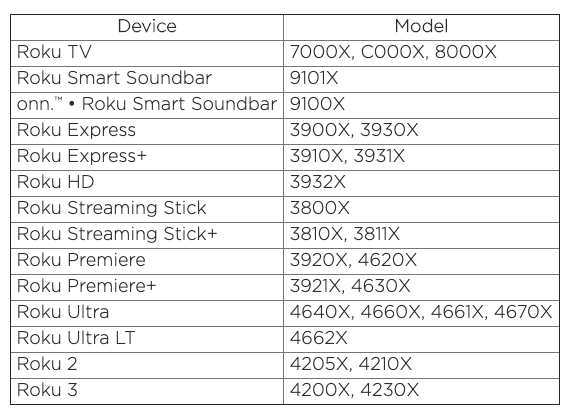 (Photo : Roku)
Here is the complete list of Roku devices compatible with the Apple TV App.

Apple TV App can be downloaded in the following countries:

But, according to Gizmodo, those who have subscribed to the Apple TV+ through their Roku devices can still access content and stream online via their Apple devices through the TV app.

Apple TV+ may be Apple's newest streaming service, launching very recently. But, it still has a rather small roster of available shows, which include Jason Momoa's See, Oprah's Book Club, The Morning Show, Dickinson, and an upcoming M. Night Shyamalan series.

New fans can try the service for a free seven-day trial.

However, Apple has announced previously that anyone who buys an Apple TV, iPad, iPhone, or a Mac will get a free one-year subscription to Apple TV+. The company is also trying to bring its streaming service to more places in the future.

RELATED TOPIC: Have an Old Roku Device? Netflix Will Stop Working on it After December 1

For those who are not aware, Roku allows you to connect streaming services to your TV and watch content from there. As of now, huge streaming services are available on Roku, including Netflix, Hulu, YouTube, HBO, and Amazon Video.

Various Roku devices and models, as well as streaming services and channels, are only available in selected countries.