Ever heard of a cannibalistic galaxy? Well, the Hubble Space Telescope has just recently captured an image of an absurd and wondrous sight in the universe which shows the spiral galaxy called the NGC 4651 but better known by people as the Umbrella Galaxy. 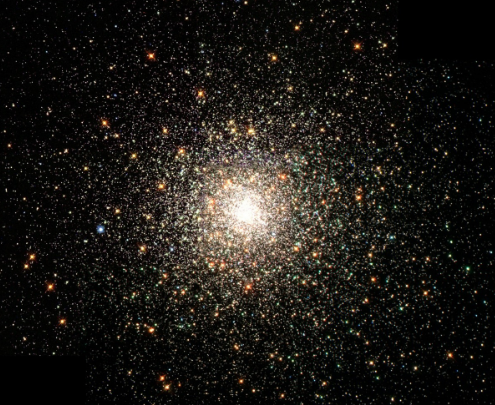 According to the Hubble astronomers, the galaxy, "may look serene and peaceful as it swirls in the vast, silent emptiness of space," then continued to warn people that they should not be fooled because this specific galaxy holds a deep, dark, and violent secret! Hubble astronomers have reason to believe that this galaxy has already consumed another galaxy in order for it to become as large as it is today with a beautiful spiral as well.

Not long ago, there was a smaller dwarf satellite galaxy orbited right around a larger galaxy but then the smaller dwarf galaxy got a bit too close to this larger neighbor and was then torn apart by the gravitational forces within and even absorbed into the bigger galaxy!

Why the galaxy is called the Umbrella Galaxy?

Today, this particular galaxy is known as the Umbrella Galaxy because of a faint umbrella-shaped structure which it hosts that spreads outwards from the core part of the galaxy. Although the structure cannot be seen in the image, it is still clearly visible in other older images of this same galaxy.

This gigantic structure currently stretches about 100,000 light-years out from the very galactic disk, and is composed of different trails which are left behind by stripped stars. This is quite a massive stretch considering that a single light-year when converted to miles is 5.879 times 10 to the 12th power!

Read Also: The Latest Internet of Things News and Trends

The current umbrella structure was formed as a result of its cannibalistic actions as the galaxy devoured its neighbor. As the even smaller galaxy was being torn apart by the powerful gravitational forces in play called gravitational stripping, a long and thin structure known as the tidal stream was formed as the result.

It is currently being believed that these specific streams, which compose of stars and gas, can eventually form what are known as extended disks just like the ones that can be spotted around the Andromeda galaxy. In the case of the Umbrella Galaxy, the stream was previously pulled away from the main galactic disk which resulted to it spreading out to form the iconic umbrella shape.

The Umbrella galaxy is massive enough to be seen by an amateur telescope with a confirmation from Hubble scientists by their explain that "Although only a telescope like the NASA/ESA Hubble Space Telescope, which captured this image, could give us a picture this clear, NGC 4651 can also be observed with an amateur telescope."

According to the scientists, if you have your own amateur telescope at home and plan to go star-gazing, you might even be able to spot out this carnivorous spiral which is a reminder of what the Umbrella Galaxy did!