The coronavirus (COVID-19) which first affected Wuhan, China, has made its way to the United States and is still currently growing in numbers. Now, ever wonder what the testing looks like for this COVID-19? A few people have started to post videos of what it looks like to be tested. 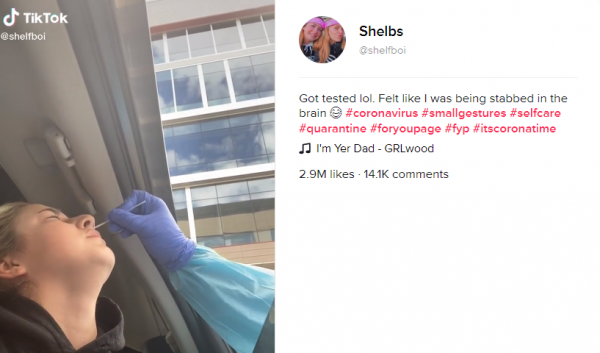 In a video posted on TikTok, a person who was getting tested shows just how uncomfortable the testing process is.

& She’s Luckily She Had A Small Swab. RT @PanamaRedin215: In case you were wondering what the Corona Virus test its like. #CoronavirusUSA #coronavirustesting pic.twitter.com/0d3fuhauH0 — Viva La BAM. (@BoomPowBAM) April 1, 2020

The severity in the United States

During the start of March, the testing for this specific virus was still limited which then resulted to only 70 cases reported within the United States whereas most of them had been tied to visits overseas. Now that the testing has been made more available, the true numbers of cases can finally be revealed.

Although it is still an alarming number, it is quite necessary for the proper officials to be able to see the whole picture of what the world is dealing with. The New York Times reports that right now, across 24 states, there have already been above 1000 known cases within their borders which then brings the total amount of national cases to 188,247 as the death toll has also increased to 3,900 to say the least as of Wednesday.

Now that the testing process has been made readily available to more people. There have been videos popping up here and there on social media showing the whole process and based on the video, things do not look quite pleasant.

Read Also: COVID-19 Tracing App Could Save Lives After the Lockdown According to Scientists

USA Today reports that patients have a swab which looks quite like a long Q-tip that is then inserted through their nose in order to reach what is known as the nasopharyngeal region where the collection of the cells happen. According to USA Today, if the patient remains calm, the swab would only take about 10 seconds or so and the whole process would not be painful.

One teen however, reported on a TikTok video that went viral that the pain felt like she was "being stabbed in the brain." This 17 year old who goes by the name of Shelby posted this video of herself recorded while she was getting tested where even the healthcare worker who administered the test apologized then said, "I wish there was a better way to do it."

This was only the start to a series of videos

Soon, other people started posting their experience getting tested and it looked just as awful. Despite this extreme discomfort which citizens are experiencing, tests remain a critical part of citizens being able to do their part and stop the spread of the COVID-19 virus.

Once a sample is collected, it is then put inside a sterile container and sent to the lab where the testing begins by using a chemical to extract the cells from the swab turning them to liquid form. The liquid is then observed under a machine which tries to match the person's ribonucleic acid or RNA with that of the virus' RNA in order to determine whether or not the person is infected.