Season 4 comes out on April 3, 2020 on Netflix and fans are psyched to know just what happens to Professor, Tokyo, Rio, and the whole gang! Luckily, it has not been too long ago when season 3 of La Casa de Papel otherwise known in English as Money Heist was released! 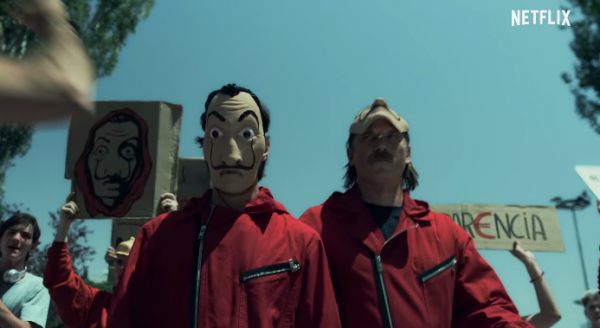 Season 1 and 2 on Netflix

The first two seasons have to be watched back to back if ever you haven't seen them yet since they are a continuation of the gang's first heist which was the Royal Mint of Spain which located in Madrid which was a clever attempt to shut themselves in and start printing money instead of stealing already existing money!

Although the heist was a success, the lives of both Denver's father Moscow as well as Helsinki's partner Oslo were lost in this process. Another key member who audiences first grew resentment towards but then learned to love lost his life as well. Never forget BERLIN!

A relationship between Monica (Arturo's or "Arturito's" previous mistress who he impregnated) and Denver has developed along with a stronger bond between Nairobi and Helsinki after the death of Oslo and naturally, Tokyo and Rio fall deeper in love. One thing that surprised the audiences in the end is how the Professor formed a love team of his own with the one and only inspector Raquel.

The new heist of season 3

The original Money Heist gang has been brought together once again due to Rio being kidnapped shortly after trying to contact Tokyo after she left their sacred island. The gang then comes together and plans out Berlin's last and greatest plot of all, the assault of the Bank of Spain!

Monica is now known as "Stockholm" and takes part first-hand in the assault while Bogota, Palermo, and also Marseille joins the team. Tokyo has her personal mission of saving Rio but once the gang has saved him, he breaks up with Tokyo leaving her a wreck.

The fatalities suffered from the hands of their new enemy inspector Alicia Sierra include Nairobi getting shot letting her guard down as the inspector uses her kid to lure her out as well as Raquel being captured by the police. The professor still does not know the whereabouts of Raquel or even if she is still alive.

Oh yeah, remember Arturito? He was able to sneak himself in with hopes of finding Monica who is now Stockholm and rekindling the romance. Arturito is also able to cause quite a wreck again even as a hostage.

A recent post on Reddit allegedly claims that a grandma was able to make watching Netflix possible on an old school box-type TV.. Interesting methods have circulated the comment section.