According to researchers from the University of Pittsburgh, they are working on a new possibility for a coronavirus (COVID-19) vaccine through the use of a relatively new method called injection technology. The whole team is working on building on previous work that had already been used as a vaccine for the Middle East Respiratory Syndrome (Mers) which was a previous deadly virus outbreak that happened last 2012. 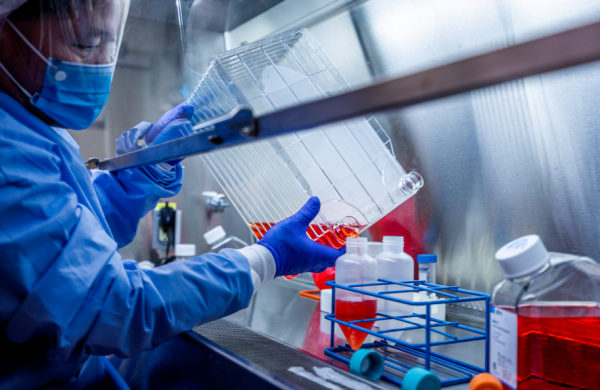 (Photo : UPMC/Handout via REUTERS ATTENTION EDITORS - THIS IMAGE WAS PROVIDED BY A THIRD PARTY. MANDATORY CREDIT. NO RESALES. NO ARCHIVES)
A researcher at the University of Pittsburgh works on a COVID-19 vaccine candidate, a fingertip-sized patch with dissolvable microscopic needles, in Pittsburgh, Pennsylvania, U.S., March 28, 2020.

Research leading to this methodology

This particular potential vaccine is delivered through small fingertip-sized patch of about 400 tiny needles described by researchers as microneedle arrays. The needles are composed of both the necessary sugars and proteins which later on dissolve under the skin.

Just like other potential COVDI-19 vaccines, the University of Pittsburgh team's candidate specifically targets the coronavirus' spike protein which is a crown-like protein located on the virus' surface that binds with the receptors on a host cell in order to gain entry to deliver the viral genome right into the cell.

Testing out the vaccine

When the potential vaccine was tested on mice, researchers were able to find a "significantly high" antibody response to the Sars-CoV-2 within just two weeks after comparing the levels taken before the specific microneedle array treatment. The Sars-CoV-2 is the actual scientific name for the coronavirus.

This recent microneedle array technology creates high concentrations of the specific vaccine in the skin that could possibly decrease the required dosages for the "efficacious immunisation and substantially reduce both cost and toxicity", according to the team paper by Pittsburgh.

Read Also: Want to Know What Coronavirus Testing Looks Like? You Probably Won't Like It After Seeing This Tiktok Video

As to whether or not this specific antigens or substances is capable of stimulating a human being's immune system resulting to a coronavirus vaccine is still unknown.

According to an associate professor of molecular medicine from the Cornell University's College of Veterinary Medicine Ruth Collins, the vaccine by the Pittsburgh's team reintroduces a technological advantage that other thousands of COVID-19 vaccine candidates my not possess. To jump from the effectiveness on the mice to the effectiveness on human beings is still a challenge.

The team from the University of Pittsburgh acknowledges this uncertainty

According to the team, even though it is way too early to be able to predict whether humans immunized by these specific vaccines will have the same or at least similar responses to the mice and be protected from the Sars-CoV-2 or even the Mers-CoV infections.

Their recent studies still demonstrate that the development, the production, and the initial animal testing of this specific clinically translatable vaccine against the Sars-CoV-2 and also other growing infections can be rapidly accomplished.

The team from the University of Pittsburgh still has to take a couple of steps before gaining the United States Food and Drug Administration's phase-1 clinical trials to commence human testing.