While the whole world is trying to fight the coronavirus (COVID-19) Google Doodle has decided to send a positive message to everyone involved in this fight. Google is now using a new doodle in order to pay tribute to those health workers as well as researchers who are fighting the coronavirus. 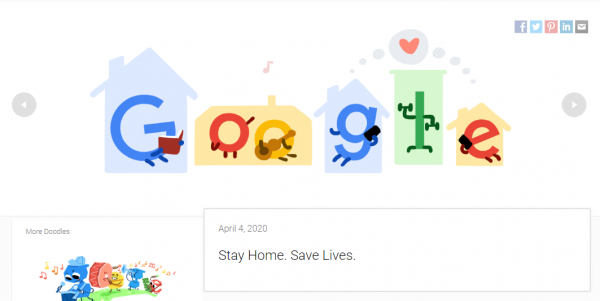 The search engine's famed logo has now been turned into an animation with a heart that hops right over the letters turning the "e" into one of the academics the brand is giving tribute to. This is apparently only the beginning of a series that aims to pay tribute to those people who are working to fight the pandemic.

Google's statements on the situation.

According to Google, "Covid-19 continues to impact communities around the world, people are coming together to help one another now more than ever." Later on expressing that in the weeks to come, the company is launching a special Doodle series which recognizes and honors the many people on the front lines.

Google further on said that "Today, we'd like to say: 'To all the public health workers and to researchers in the scientific community, thank you.'" Showing both their recognition and gratitude to those who have been sacrificing a lot in the battle of this coronavirus pandemic.

There are many different Google Doodles that are to be shown in specific regions but there is one that has a significantly high global reach. On Monday, April 6, the new Google Doodle will be visible in browsers worldwide, including New Zealand, Russia, Brazil, and also the UAE.

Google has released their own dos and don'ts for their readers to avoid COVID-19 saying that readers should wash their hands for at least 20 seconds with soap and of course water or maybe even an alcohol-based hand rub. Another step from Google is to always cover both your mouth and nose using a disposable tissue or even your flexed elbow whenever you cough or sneeze.

Another critical tip is to avoid close contact with people who are unwell staying at least a meter away from them. The last tip from Google is to as much as possible remain indoors and practice self-isolation from others in the household especially if you are feeling unwell.

A very critical No-No which Google has been adamant about is to avoid touching your eyes, nose, and also your mouth when your hands are not clean.

The first time Google paid tribute was on Friday, April 4, with a simple animation that had a simple message, for people to stay home in order to save lives. Friday, March 20 was the day the search engine paid tribute to Ignaz Semmelweis, who is a Hungarian known for discovering the importance of clean hands to our health.

The physician as well as scientist is known as Semmelweis who was born in 1818 and is easily recognized as one of the pioneers of these antiseptic procedures.