As everyone is encouraged to stay indoors to avoid infection of the coronavirus (COVID-19) sometimes a little motivation is highly needed. Astronauts aboard the International Space Station (ISS) have decided to share their workout routines on their very own social media platforms in order to motivate people at home to stay healthy through exercise. 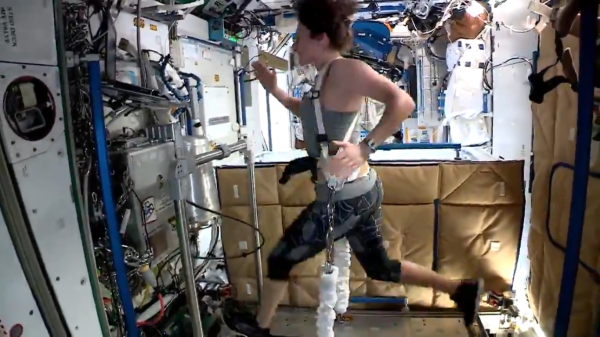 (Photo : Screenshot From Jessica Meir @Astro_Jessica Twitter Page)
[VIDEO] Ever Wondered What Working Out In Space Looks Like? NASA’s Astronauts On The International Space Station Show You How It’s Done!

Jessica Meir has posted a workout video on her private Twitter as well as images of her makeshift equipment which even includes a vacuum system that kind of looks like free-weights! You can also spot a treadmill mill bungee cord as well as a stationary bike without a seat or even handlebars!

Meir has said in the clip that there are studies that prove that exercise is important not only to your physical health but also your well-being especially now during the coronavirus. According to Meir, it might take a little bit of creativity at home in order to get that heart rate elevated but she is confident that people can come out with something.

Even the International Space Station has their own Advanced Resistive Exercise Device otherwise known as (ARED) which according to Meir, is a crew's one-stop workout machine which uses two massive vacuum tubes in order to generate some resistance!

The device also makes use of a piston and flywheel system in order to help the astronauts do their free-weight exercises just like they would should the gravity be normal. Squats, calf raises, and even deadlifts can be done through this machine!

As the current residents of @Space_Station, @AstroDrewMorgan and I thought we'd share some of our strategies for living happily in isolation. Tip #1: Exercise is vital not only for physical health, but also to your mental well-being. Here's how we do it on @Space_Station . . . pic.twitter.com/Dzyh5WYBBj — Jessica Meir (@Astro_Jessica) April 1, 2020

According to NASA, "While ARED's primary goal is to maintain muscle strength and mass, resistive exercise also helps astronauts increase endurance for physically demanding tasks such as spacewalks." Which shows how they value physical fitness.

The crew is also reported to do certain cardiovascular exercises by using a small treadmill or a stationary bike although they are quite unlike those you can spot at the gym. The spaceship also has their own treadmills which were made to allow astronauts to run even without vibrating the equipment.

Scott Kelly's take on the matter and more

Meir also mentioned that another interesting thing about their treadmill or stationary bike which is the fact that it does not have a seat nor a handlebar! NASA's very own astronaut Scott Kelly who has been onboard the International Space Station for close to a year has shared his best advice for people to survive isolation.

According to Scott's statement in The New York Times, ''I actually started to crave nature - the colour green, the smell of fresh dirt, and the feel of warm sun on my face." Scott continued by saying that people do not need to work out for two and a half hours at home amidst the coronavirus.