Riot Games is launching a new game called Valorant and although fans of this game production company are excited to try it out, a controversial feature has just been confirmed to be included in this game. This first-person shooter game is quite already gathering much attention and making headlines and controversies even before its official release. 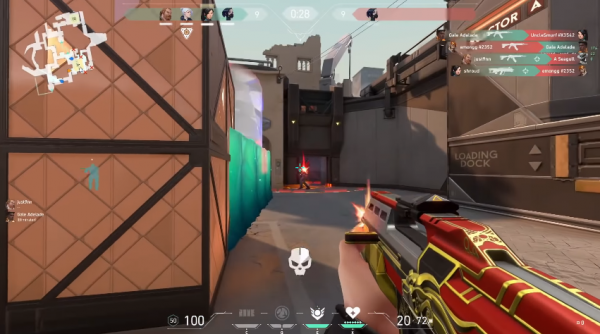 (Photo : Screenshot From Shroud Official YouTube Page)
Riot Games Confirms Controversial Feature To Be Added To Valorant: Will This Make Or Break The New Game?

It is already known by the public that the game will be implementing a skill-based matchmaking otherwise known as SBMM gameplay in its Ranked playlist which has surprised most fans when this was officially announced. According to the game director by name of Joe Ziegler, the feature is confirmed to be implemented also in the unranked category which has been called by Riot Games as "Unrated."

A certain fan recently posted a statement on Twitter questioning this happening and Ziegler himself was able to answer in a straightforward matter saying "There will be skill based matchmaking in unrated" which means that the upcoming "Valorant" players will actually be pitted against those who are on the same or at least similar skill level.

With that clarification being brought to public, players can expect that those who win in a consistent matter will then be matched against other players who happened to be able to do the same! This controversial feature has been the subject of many inquiries.

What does this structure mean?

Other games just like Fortnite, Call of Duty, or even Apex Legends use a skill-based matchmaking system but that does not mean that it is a welcome addition for most of the players. After all, the specific feature has been talked about in the recent years, especially for the frequent and also skilled players.

With this SBMM system, top-ranked players will no longer have the opportunity of playing casually or even enjoying the game even without having to become too serious. This system is made in order to protect casual gamers which are a big part of the majority player-base.

The additional feature could be a little more friendly towards the new players but this should be tougher on those casual but professional players as they have no way of playing without having to become way too serious.

According to earlier reviews of the video game by Riot Games, there was a huge emphasis on the need for players to possess actual skills for them to possibly thrive in the game. This upcoming first-person-shooter game is described as a new "5v5 character-based tactical shooter" game which means that players will be needing to work on a certain bigger team much unlike the current battle royale games available on the market.

Most fans see this upcoming game by Riot Games as a little more competitive compared to what they are used to when it comes to casual gaming. The new Valorant game's SBMM feature is not necessarily a bad thing for the whole game. Players will be able to see for themselves whether or not this game's new platform works.