A Japanese comedian was able to storm the internet with his nonsense hit called the "Pineapple-pen" becoming a huge success on social media and even entertaining the United States President, Donald Trump! The song is actually back with a brand new remix only this time, the message of the song has gotten deeper. The message of the song is now about washing your hands! 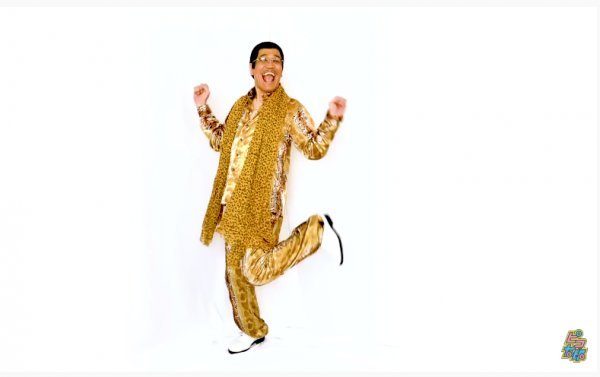 This specific entertainer goes by the name of Pikotaro and has has even gotten a Guinness World Record way back in 2016 for his 45-second Pen Pineapple Apple Pen or more popularly known as "PPAP" hit which has actually become the world's shortest song to ever break into the Billboard Hot 100 itself!

As of recent, he has actually repurposed this catchy and bizarre hit in order to promote proper handwashing as the whole world tries to battle the global coronavirus pandemic even by the application of simple hygiene.

Pikotaro actually rose to fame way back in 2016 right after pop star Justin Bieber shared his video on social media saying that it was his "favourite video on the internet" and naturally, fans started to check the video out, share the video, and voila! PPAP became famous!

The Japanese performer Pikotara is still once again dressed in his trademark animal print with a really thin moustache! Pikotaro then swaps the original lyrics "I have a pen. I have an apple. Apple pen!" to new lyrics saying "I have a hand. I have a soap. Wash! Wash! Wash! Wash!"

As the performer displays his palms before pressing them together, he starts saying "Clean hand, clean hand," ending with "Pray for people and peace (PPAP)."

Once again, the song has done what it was supposed to do and just after three days, the song has been able to rack up more than three million total views on YouTube! Even the comedian's Twitter page is blasting with videos of different Japanese children laughing as well as imitating his all new handwashing dance.

According to an amused parent, "My three-year-old gets thrilled by Pikotaro's PPAP 2020. Let's wash hands," which shows that this song actually did have a positive effect on the younger generation during this pandemic as washing hands now seems fun because of the song itself!

The success of the video

The video has already been viewed 67 million times within just a few weeks of hitting YouTube and is now being mimicked by children all around the world which include United States President Donald Trump's grandchildren themselves!

Pikotaro was even a surprise choice to entertain Donald Trump when he visited Japan way back in 2017! This viral and entertaining song was well received by Trump as the president even has a photo with Pikotaro showing all smiles.

This video's success has been a worldwide phenomenon and not just in Japan.