Netflix has just recently released a documentary called Tiger King: Murder, Mayhem and Madness which had fans interested but as the story unfolds, the main character of this documentary, Joe Exotic, was found out to be not exactly what he seemed like in the documentary. 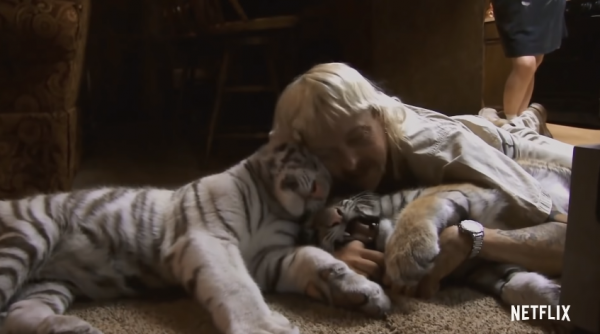 According to Joe Exotic's niece named Chealsi Putman, Joe Exotic was not actually good with the animals just like he was portrayed in the documentary. The niece spoke out about the star of this recent Netflix documentary saying that not everything was seen in the show.

Chealsi Putman revealed a dark secret about Joe Exotic that would shock followers of his Netflix documentary as well as the whole world. According to the niece, Joe even freezes dead tiger cubs before selling them to taxidermists.

Who is Joe Exotic?

According to Chealsi Putman, the 57 year old Joe Exotic was not actually caring for his own animals like he claimed to do so and that there is also a darker side to him. Upon speaking to the DailyMailTV, the 31 year old Chealsi has alleged that the real-life persona of Joe Exotic is "100 times worse" and that she just wants people to know the true nature of her uncle who is not what he seems on TV.

Joe Exotic actually used to run the Greater Wynnewood Exotic Animal Park located in Oklahoma right before he was sentenced to 22 years in prison due to 17 counts of animal cruelty and also for the murder-for-hire plot he had to dispose his nemesis, the animal rights activist known as Carole Baskin.

Joe has again and again denied these allegations but now his niece has claimed that he even froze dead tiger cubs in order to sell them to taxidermists. According to Chealsi, whose mother is the younger sister of Joe, Joe was actually a "good guy and genuinely cared for the animals," but things changed when he started to see them as a money-making machine.

Read Also: [VIDEO] The Purge Siren Being Used By In Louisiana As Coronavirus Deaths Start To Pile

Chealsi Putman's claims on her uncle

Chealsi Putman said that she had previously worked for Joe right between 1999 and 2017 doing a bunch of odd jobs for her uncle. She described their relationship as having ups and downs because she could not deal with him.

According to Chealsi Putman, her uncle Joe had been selling baby tigers illegally saying that "I've personally witnessed Joe spray a tiger with a fire extinguisher, not out of a safety or for a life saving reason, but because the tiger didn't react the way Joe had wanted it to."

Which she continued in stating that her uncle would rather take cash right under the table for a sale of the tiger or if someone had sent a check explaining that, "it would be made out to another person, or if the money was wired to a store, it would be in another person's name."

Joe still continues to deny these allegations including the fact that the sold any tiger tubs without the necessary paperwork. According to Chealsi, her uncle would have frozen at least 10 tiger cubs saying that she had "no idea what happened to them, they would just disappear."

A recent post on Reddit allegedly claims that a grandma was able to make watching Netflix possible on an old school box-type TV.. Interesting methods have circulated the comment section.