[VIDEO] Giant Alien-like String Creature Found On The Hunt. What is it? 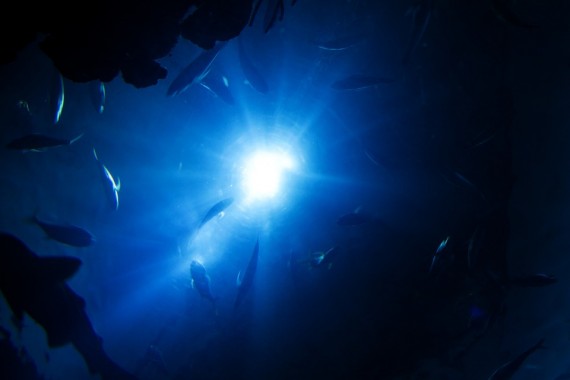 An enormous sea creature has been seen floating in the waters of Western Australia. The video footage shows the animal in a galaxy-like circular position where it is believed to be hunting for food.

How did they find it?

The Schmidt Ocean Institute shared the recording on Twitter. They encountered the creature during a deep-sea expedition of the Ningaloo Canyons. Curious to figure out just how long the see animal is, lasers were used to determine the length of the siphonophore's outer ring and was estimated to be about 154 feet long based on its diameter, which leads experts to presume that it is the longest animal recorded.

According to the Monterey Bay Aquarium Research Institute, Siphonophores are classed as deep-sea predators similar to the likes of jellyfish and corals in the way they catch prey. They feast on tiny organisms and small fish, and may even indulge in other siphonophores in the curtain of their stinging cells. According to Wiener, the colony consists of thousands of distinct, specialized clone bodies working together as a group.

The event was captured on March 16, at about 631 meters under the ocean during the dive of the Western Australian Museum.

Completing 20 dives, the month-long expedition made by the team may have discovered up to 30 new species of sea creatures.

Wendy Schmidt, a co-founder of Schmidt Ocean Institute, stated the overwhelming lack of knowledge we have regarding the deep sea and its inhabitants, never before seen. She also said, "The Ningaloo Canyons are just one of many vast underwater wonders we are about to discover that can help us better understand our planet."

Schmidt said they have been broadcasting live feeds from within the ship to share science lessons during the lockdown. She said it was nice to be able to continue studies and bring about positive news amid the crisis of the pandemic.

The video was noticed by the University of North Carolina's own Rebecca Helm, who studies jellyfish development and evolution. Ms. Helm constructed a Twitter thread detailing the facts of the finding and how it was significant to the scientific community.

What is different with this creature?

The scientist expressed her astonishment as she's gone on several expeditions without any compelling evidence of new scientific information like the Siphonophore discovery. She also said the creature was not just massive, but it was also showing signs of hunting.

Rebecca said the animal was using some specialized clones to snag its unsuspecting prey. Once captured, the victim would be digested and its nutrients distributed along the lengthy body of the organism.

Due to the arctic temperature of the deep sea, it is difficult for life to grow compared to other environments, which makes it difficult to estimate the age of the animal. Ms. Helm presumes the creature to be tens, possibly even hundreds of years old.

The scientist shared there are several million or even billions of colonies similar to the one discovered just waiting to show themselves to the world. She states Siphonophores are relatively common but frail. Ms. Helm wonders what other creatures we may see as we explore more of the seas.

Read Also: NASA Program To Utilize $7M In Funding Research, From Stronger Spacecraft To Landing Humans On Mars - What They Have Planned Will Blow You Away

A group of scientists from the Baylor College of Medicine located in Houston has recently developed a certain brain implant that actually allows both blind and sighted participants to "see" the shape of different letters!

Scientists were able to find out something particularly different from the 21/Borisov. The comet from another planetary system could be revealing more about the galaxy.

Bionic Teen: Journey Of A Girl To Riding A Bike Since Being Equipped With First Medically-Certified 3D Printed Bionic Hand

A fourteen-year-old teen born with most of her left arm missing is given a new bionic arm and she can finally learn to ride a bike!

Scientists Find Living In Space Makes Your Brain Bigger And That's Permanent; What Other Effects Could It Have On The Human Body?

Increased brain size caused by staying in space for a prolonged period of time, a study observed