A Cosmic Phenomenon: Discovery Of Connection of Energy Within A Galaxy Sparks Excitement To What Other Space Secrets It Could Lead To 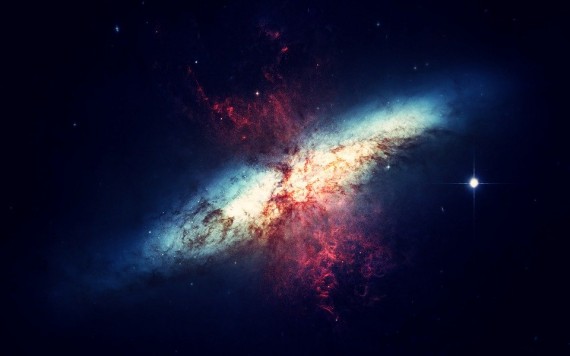 On Wednesday, Astronomer Dr Mpati Ramatsoku of Rhodes University announced he and his colleagues have become accustomed to the usual sight of the galaxy.

Dr Ramatsoku said the space cluster consists of a core which is home to a supermassive black hole that shoots out two jets of plasma that race at near the speed of light. The energy found within the jets will ultimately slow down and disperse, producing large radio lobes.

The astronomer also stated what makes this particular galaxy different is the appearance of what seems to be several, supplementary filaments that link the lobes.

Ramatsoku is the lead author of an international team of astronomers' study of the discovery. They are conducting this endeavour with help from the state-of-the-art radio telescope MeerKat from the Northern Cape Karoo.

The radio telescope SA MeerKat which was launched in 2018, is the means of answering fundamental astrophysical questions regarding the universe.

Ramatsoku said this particular galaxy that belongs in the Norma cluster of galaxies is quite captivating and one of the brightest in the southern sky. And its characterization being the two bright lobes of radio emission which are bent in one direction.

She added with this discovery; they now have knowledge of these new features in the form of multiple collimated synchrotron thread connecting the lobes.

The head of the South African Research Chairs Initiative for radio astronomy over at Rhodes, Professor Oleg Smirnov, expressed the team's excitement over the discovery. He said the beautiful revelations of space are of great importance for MeerKat because they are proof of its amazing capability for locating the 'unknown unknowns' within our universe.

The unexpected finding boosts the team's morale and reminds them of the very reason they undertook their profession in the first place.

Read Also: Looking For The Best Band For Your Buck? Here Are Some Cost-Efficient American Road Monsters You Can Choose From!

Further study of the phenomenon is required to understand its nature further, added Ramatsoku. She also said it is probable for the event to be distinct to the observed galaxy due to its severe climate and environment. It is correct to think the occurrence is common in other radio galaxies but are undetectable due to the lack of more powerful astronomical equipment.

She states if it is indeed more than one galaxies phenomenon, it brings about new challenges and unknowns in figuring out the true nature of these cosmic bodies.

Insight to the nature and physics of these filaments may bring with it backing for other sensitive radio interferometers such as MeerKat and future similar equipment, like the Square Kilometre Array (SKA).

Smirnov credited professor Justin Jonas for being the one responsible for MeerKat's birth and the transfer of the SKA to South Africa. Having been with Rhodes since his student days, Professor Jonas was awarded the vice chancellor's distinguished achievement award last 2019.

A reporter for Herald said even the smaller institutions, such as Rhodes University, are capable of bringing about discoveries of cosmic importance to the field of space exploration.

Read Also: NASA Program To Utilize $7M In Funding Research, From Stronger Spacecraft To Landing Humans On Mars - What They Have Planned Will Blow You Away

Nuclear Hibernation: Fusion Reactor Collects Heat As It Sleeps And Becomes Ready To Wake Up After 30 Years

Could Nuclear Fusion provide the much-coveted unlimited artificial energy source the world sorely needs? The ITER might be the answer to the age-old question