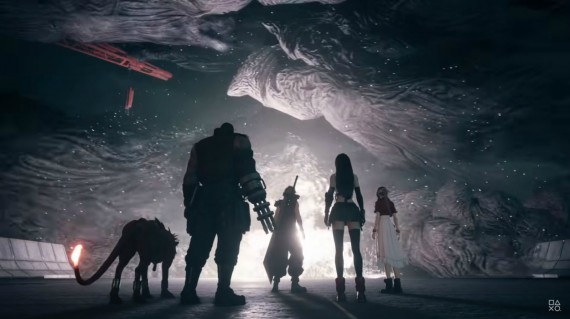 The open-air is filled with color, and the night sky is covered by metallic protrusions high in the sky. The fantastic world of Midgar has set its roots as the most powerful city found in the most powerful nation on Earth.

The separation between the rich and poor is as high as the distance from the ground to the sky. The rich reside high up on the plates, whereas the poor dwell in the murky depths below, where they only ever experience 'daylight' from sun lamps.

On April 10, claw your away through Midgar's finest. Wield your mighty sword larger than yourself and rescue a friend, find allies, earn people's trust, and strengthen yourself in the dangers of the arena.

Supported by a capable, magic spell caster, cleave through your enemies and reach the final hurdle to best the menacing--house? That's right, a house. In the last fight of the first area of the game, you face off against an enchanted building that fires rockets made of its gnarly chairs.

Remaking the original Final Fantasy VII is an excellent undertaking in itself, challenging Square Enix to find the right balance between satisfying fans of the iconic game, and provide a means of attracting new players.

To some, the remake is taboo, and it will only ruin the nostalgia they have, but despite this, the risk paid off. The return of the fantasy world is a dazzling recreation of one history's most iconic game.

Read Also: A Cosmic Phenomenon: Discovery Of Connection Of Energy Within A Galaxy Sparks Excitement To What Other Space Secrets It Could Lead To

The game is a Japanese-style role-playing game where players control Cloud Strife, a wandering mercenary to maneuver the streets of the city. Take jobs for an organization called Avalanche.

Midgar is lead by Shinra, an arms manufacturer that is thought to be in custody a planet-wrecking power source. The story only gets bigger and bigger from here on out, but you have to experience it yourself to enjoy what the game has to offer fully.

The plot behind the remake consists of an eco-terrorist organization in their effort of stopping a massive corporation in control of everything that is poisoning the planet-echoing today's generation much more than it did during its original release.

The story gives players an enjoyable experience on its own, but what sets it apart from others is its combat mechanics. The system provides more than enough immersion to last you several hours of in-game time to make the most of.

Take control of up to three allies at the same time to battle enemies and evade their deadly barrage. An Active Time Battle (ATB) meter is filled up each time you take and deal damage and is used to activate powerful spells and abilities you can use to conquer your foes.

Take note of each enemy's strengths and weaknesses; it could spell the difference between victory and defeat. Each playable character runs differently as well, from nimble and quick assassins to powerful, long-ranged shooters that move at a slower pace.

The idea of a melee caster is also possible with the use of Materia; orbs that hold immense power, which is used to cast spells, and any character can equip these stones. The wonders of this customizable system are the multitude of different playstyles you can come up with. You can also keep changing things up as you go to find the best combination of abilities suited for you.

Another aspect of this game is it doesn't require any knowledge of the previous games for you to dive in and enjoy, it brings its own story and completeness right to your console. Even new customers who have never known about Final Fantasy before this will be able to enjoy this game to its fullest.

The ending of the video game is a hot topic among those who already know it, but for some, it will likely become controversial and highly talked about. The first of a trilogy, FFVII Remake, will probably give players an epic adventure that will set them off to a fantastic start in their quest.