[VIDEO] Bill Gates Foundation Backs Up Second 'Skin Deep' Vaccine Candidate: Is This More Effective Than The First One? 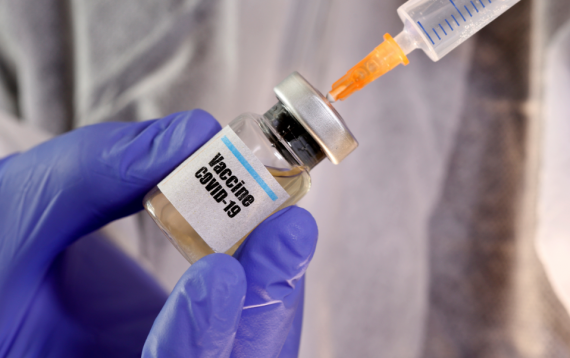 A woman holds a small bottle labeled with a "Vaccine COVID-19" sticker and a medical syringe in this illustration taken April 10, 2020. (Photo : REUTERS/Dado Ruvic/Illustration)

The very second candidate vaccine for the coronavirus begins safety trial in the United States using a new skin-deep shot instead of the previous deep jab injections straight to the muscle. The pinch should actually feel just like a simple skin test, researchers have just recently told one of the many 40 volunteers lying right on the exam table located in Kansas City, Missouri, on Wednesday.

According to Dr. John Ervin of the renowned Center for Pharmaceutical Research in his statement to The Associated Press, "It's the most important trial that we've ever done," said Dr. Ervin continuing with "people are beating down the door to get into this trial."

The experiment is said to be using a certain vaccine candidate which was previously developed by Inovio Pharmaceuticals and is part of the ongoing global hunt for the much-needed protection against the virus that has triggered an economic shutdown which is now forcing people indoors as countries try to stop the spread of this virus.

The previously founded Bill and Melinda Gates Foundation's decision to fund this study is the very first step to see if this vaccine appears safe enough for even larger tests needed to prove whether or not it is effective against the coronavirus. Even if the research goes well, it is generally expected to take over a year before any vaccine could be readily available on a wide scope.

Each volunteer will then receive two doses of the new experimental vaccine named the INO-4800 that will be administered four weeks apart either at the Kansas City research lab and the University of Pennsylvania. This pharmaceutical company is working with expert Chinese researchers in order to begin a similar study required in the country soon.

The administration of these vaccines

There are dozens of potential vaccines that are being designed in labs all around the world which are expected to begin this testing process over the upcoming several months. In fact, the very first United States trial has started its safety testing in people just last month in Seattle, one of this was developed by the United States National Institutes of Health.

There have already been about two-thirds of that study's participants have gotten the very first sequential needed doses.

According to Dr. Anthony Fauci, the director of the National Institute for Allergy and Infectious Disease in a podcast for none other than the Journal of the American Medical Association on Wednesday, "the good thing is we've got a bunch of candidates."

Most of the vaccines that are under development have the very same target: A spike protein that studs the surface of this virus and helps it invade human cells.

Inovio researchers have packaged a section of the virus' genetic code inside the piece of synthetic DNA. Injected inside as a vaccine, the cells actually act as a mini-factory in order to produce harmless protein copies. The immune system then makes protective antibodies against them which are the first resistance if ever the real virus does come along.