A sudden outbreak of tornadoes in Mississippi claims the life of one unsuspecting victim and results in several 'possible fatalities.' The events unfolded in a stream from Jefferson Davis County on Sunday.

The fatality was confirmed in Walthall County by the Mississippi Emergency Management Agency (MEMA), while the possible casualties were reported by the National Weather Service (NWS) in Jackson.

Clusters of storms barraged the states of Mississippi and Louisiana with already 13 confirmed on radar by Sunday at 4.p.m. According to the National Weather Service, the county of Jefferson Davis was hit by two tornado emergency warnings with an additional one running after the specified timeframe.

The event came with little warning, prompting people to panic in trying to avoid the brunt of the catastrophe and shelter themselves and their families.

Several photographs of the destruction were being shared on Twitter by the affected families. They show the amount of damage that the tornadoes brought, from fallen trees to cut power lines and devastated homes and infrastructure.

A Facebook Livestream showed an NWS meteorologist exclaiming "deadly tornado" at least five times within a 30-second timeframe. Residents were warned to take shelter, stating the future storms would be "violent," "large," and "catastrophic."

The latest news on 5:45 p.m. gives out a tornado warning for Kemper and Lauderdale that would last for an hour.

The photo below shows the expected forecast of the storms in the areas that are hit. 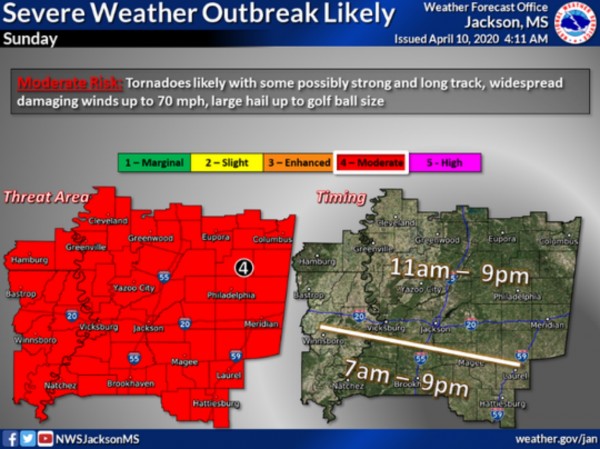 Weather / Meteo World also shared on the social media the damage in Mississipi that was brought on by the storms.

Significant #tornado damage in first views of #Soso, Mississippi after it was directly hit by destructive tornado a little while ago! #mswx https://t.co/9A6xgxe46Q — WEATHER/ METEO WORLD (@StormchaserUKEU) April 12, 2020

Reports of damage begun flowing in as the tornadoes started plowing through the states as residents hunker down and protect themselves.

An image was shared by the Mississippi Emergency Management Agency (MEMA) that shows a tornado between Holly Bluff and Yazoo City. While the NWS retweeted captured images of broken barns and other buildings.

Reports of flash flooding were also seen affecting the Panola County on Sunday afternoon. A video of a submerged apartment was shared on social media by MEMA. Several prisoners were seen helping with sandbag operations, though it is unknown which jail the convicts hailed from. At 3:15 p.m., a severe thunderstorm warning for the counties of Attala, Choctaw, and Winston was raised by the National Weather Service.

The organization also tweeted a video showing the possible path that a storm was to engage in. They notified the residents of the danger and advised them to stay indoors if they were within the red polygon.

Another tornado was observed by the NWS in the county of Yazoo.


The National Weather Service shared a tweet of a severe thunderstorm warning that was issued for Issaquena, Sharkey, and Washington at 1:30 p.m. Sunday.

The initial post by Jackson's NWS showed the probable areas to be hit the coming tornadoes. As shared in a tweet by the organization, it can be seen which states they expected the storms would reside in and release the Tornado Watch.