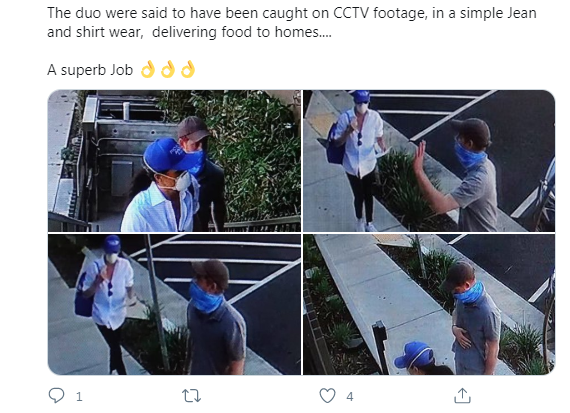 The Duchess of Sussex herself was spotted sporting a blue bandana over her face as she was seen stepping out in Los Angeles with Prince Harry for the very first time since the couple recently moved in last month. The 38 year old Meghan and 35 year old Harry were spotted walking their own two dogs in the city on Thursday.

The price, who is currently still the sixth in line to the throne despite having stepped down from the royal duties, was pulled along by the couple's own black Labrador, while Megan at one point was carrying her beloved rescue beagle named Guy.

The new couple in LA

The new couple have been following the Southern Californian regulations, which include wearing face masks as a mandatory measure in order to fight against COVID-19 but the security guard that was thought to be with them did not wear a face mask at all.

Meghan was sporting a casual outfit dressed in skinny white jeans, trainers, a twinset, and also a baseball cap. Harry was wearing one of his more familiar faded polo shirt, jeans, his desert boots, and also a hat!

Sensibly, the couple were not accompanied by their new 11-month-old son named Archie, who is said to be 'toddling everywhere'. These Sussexes previously stepped down as senior working royals back in March 31.

Although they have initially moved to Canada last year, they have just recently set up their new home in California which according to friends was always their plan all along. It is also thought that they have been staying in Malibu while working on 'finding their feet' and looking for their 'forever' home.

The royal couple out of Sussex

The couple, who were previously made to give up their own Sussex Royal branding by the queen, are now being bankrolled by Prince Charles for the very first year of their new life together.

It was reported that this week, they have been trying to distribute meals to the needy located in LA for the Project Angel Food charity, and were previously spotted in West Hollywood on Wednesday. They were still accompanied by a security team, but were able to deliver the food alone.

A certain source that was close to the couple told the Daily Mail that they had always hoped to keep volunteering in private but were also glad that the charity was starting to gain recognition. Meghan also made a video call to those volunteers at The Hubb Community Kitchen in London, with whom she has previously written a charity cookbook to.

The charity was previously set up after the Grenfell tragedy and the women who are behind it are now delivering 300 meals a week to those people in London who are vulnerable to the COVID-19. Meghan has previously said that "A home cooked meal from one neighbor to another is what community is all about."