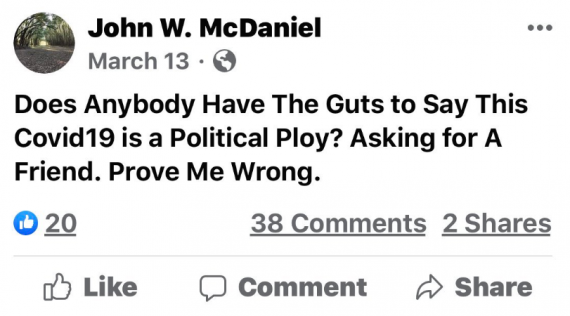 Man Who Claimed that "Covid19 is a Political Ploy" on Facebook Becomes First in Marion County to Die of Coronavirus (Photo : Screenshot From Oskaer @Oskaer__13 Twitter Page)

A certain 60-year-old man from Ohio who has vocally dismissed the state's own coronavirus lockdown as merely a "political play" along with other allegations that the government did not have any authority to close businesses due to the pandemic has recently died of COVID-19. A specific John McDaniel of the Marion County, who has previously tested positive for the virus back in March, has passed away at the Riverside Methodist Hospital located in Columbus this past Wednesday.

Right before he caught the virus, McDaniel was pretty vocal and even posted several messages on social media attacking the Governor Mike DeWine for issuing out a stay-at-home order. The allegations were pretty nasty and have caught some attention on social media.

The posts on social media

McDaniel's allegations start off with saying that if what he is hearing is true, that Governor Mike DeWine has actually ordered all of the bars and restaurants to be closed, "I say bull****" his post that was published back in March 15 reads.

McDaniel was then saying that the Governor did not have any authority to do what he just did and that if people are paranoid about catching the virus or getting sick, they should just simply not go out. He has also said that the virus should not keep others from being able to live their own lives.

McDaniel even added "The madness has to stop" to top everything off after his series of rants and accusations.

Read Also: Tennis Player Novak Djokovic Says "I Am Opposed to Vaccination": This Could be the Greatest Mistake of His Tennis Career Amidst Pandemic

The post that got most attention was a post that was asking if anyone out there had the guts to say that the Covid19 is certainly just a political ploy. He then added to it by saying "asking for a friend" and later on asking people to prove him wrong.

Most of the strong messages that McDaniel's Facebook was hosting have been circulating social media but as of recent, those posts were apparently deleted. It is still unknown as to why those posts were deleted or when they were taken down. McDaniel is apparently survived by his wife and children and even was the president of O&M Company, which is a certain industrial equipment supplier that is based in Marion.

According to the Marion Star themselves, McDaniel is the very first resident of Marion County to actually die of COVID-19. The Marion Public Health Commissioner known as Traci Kinsler has said in a certain press release that was issued on Wednesday that they give their deepest sympathies to McDaniel's family and friends along with a reminder that the pandemic is very real.

Twitter has started to voice out how they felt about this certain man who vocally did not believe in the exact virus which he then contracted and even died of. Some of the comments on Twitter are very negative. A few screenshots of the statuses have come to surface.