Black holes usually devour their prey in an instant, but experts have observed one taking its sweet time in enjoying its meal. One astronomer believes he may have spotted the doomed remains of a white dwarf star radiating the last of its light as an emergency signal. The massive predator, however, paid no heed to the distress calls of the tiny victim as it continued to shoot it back and forth around its orbit, eventually leading to its demise.

A white dwarf is most commonly born when a red giant exhausts all of its gases and is left with its bright, white core. This particular white dwarf, on the other hand, has had its gases sucked up by the nearby black hole. It's the cost of getting too close to the gravitational behemoth.

Andrew King, an author of the new research and currently working at the University of Leicester as an astrophysicist, said in a NASA statement that his interpretation of the data gathered, the white dwarf seemingly survived the encounter, but is now trapped in the clutches of the black hole where it continually orbits in an elliptical manner around the core averaging one round trip every nine hours.

The data was captured using NASA's Chandra X-ray Observatory with help from the European Space Agency's XMM-Newton X-ray Telescope. The results show that every nine hours, a spike in x-ray emissions is observed by the equipment, leading to the theory of near-miss tidal disruption events. 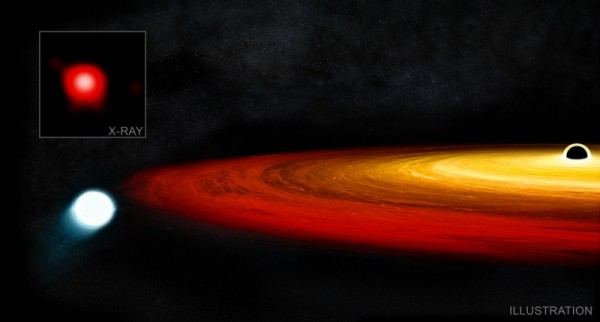 The event occurs when a black hole rips a stray star that has come too close to shreds. The theory states that initially, a red giant star approached a little bit too close to the black hole, far enough not to be sucked in immediately, but close enough to have its gases pulled away from it.

The relatively small black hole (approximately 400,000 times the mass of our sun), however, wasn't strong enough to bring the fight to its end. It instead kept the star nearby with its gravity, saving it for every time it comes close enough to have its matter sucked up little by little.

The fate of the star is sealed because no matter how hard it tries to escape the black hole, it will never be strong enough to survive. King said the black hole would continue to eat the star bit by bit until it completely devours all of what's left of the cosmic body.

The astronomer estimates the star, which is about one-fifth the mass of our sun, will spend trillions of years of its life being whittled down into a smaller size with a mass comparable to that of Jupiter. The expert added his amazement of how the process is a prolonged and arduous way for the universe to create a planet.

These occurrences are sporadic even in terms of astronomy, and scientists are amazed by the mere fact that it was observed at all. In astronomy, the event can also be visible only for a limited amount of time, relatively speaking, a short 2,000 years or so, experts said. Scientists believe there may be plenty of other events like this one that we have missed.