Staying home amid the coronavirus lockdown has had many people dreading the indoors. One family, however, is having the time of their life after their little toddler was caught playing with dog food. Her parents interrogated the child in question, and she is seen confidently keeping her facade that she is innocent.

The 38-year-old mother, Sarah, who hails from Jacksonville, Florida, questioned her daughter Lilyana after she saw her taking food from their dog's bowl.

Being afraid of getting into trouble, the little one was quick to deny the claim, although she was seen in the act.

The mother was able to catch the hilarious encounter on video as the toddler continued to lie her way out.

Sarah asked her daughter if she touched the food, where the child was still hesitant to be honest even when her father, Tim, joined the conversation.

The little kid just kept on repeating the line, "No, I didn't touch the food!' as confidently and 'truthfully' as she could.

The toddler continuously repeated her statement that she did not touch the dog food. 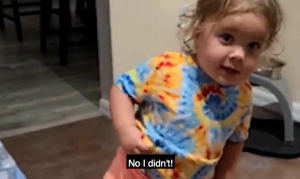 The family kept going back and forth between questions and getting the same response from their child.

The parents struggled to maintain their strictness during their daughter's sudden outburst.

Lilyana exuded the confidence of a lawyer in putting up her case of innocence, desperately trying to convince her parents she wasn't guilt, as they otherwise believed. She repeatedly walks back and forth while answering the questions switching from looking at her mother to her father.

After her attempt at redemption, Lilyana could be seen walking away without a shred of guilt after being drawn to the television, ending the debacle prematurely without a conclusion.

The ecstatic mother uploaded the video of the confrontation on Facebook and quickly amassed more than 280,000 shares and 28,000 comments.

Users were quick to share their amusement regarding the event and commented on their thoughts on how hilarious the child is.

Others commented about how some people might think that children of Lilyana's age can't have the ability to lie. Another user pointed out the child's future in law with her credible and convincing defense.

The reason behind the confrontation

Sarah commented about her video explaining the events that led to the confrontation. She said she was washing the dishes as their little daughter came and tried to get a knife where Tim quickly reprimanded her.

After her chore, Sarah saw Lilyana go over to their dog, Jude's bowl, and grab a handful of food. The mother then asked her daughter why she did so, and that's how the argument started.

The mother shared that the little toddler doesn't argue confidently like that, but like most kids, only try to get what they want as much as they can.

Sarah just thought to herself, 'What 21-month-old doesn't try?' as the parents continued to tease her that led to not touching the food at all.

She also added they immediately went out to ride her bike and play with bubbles after she got distracted by the TV.