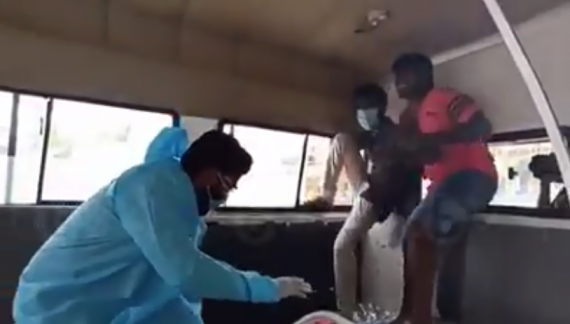 [Viral Video] Cops Decide to Prank Lockdown Violators by Forcing them into an Ambulance where a "Sick" Police Officer was Waiting (Photo : Screenshot From Gorona Murali Facebook Page)

The current pandemic has pushed the whole world to apply certain precautionary measures to keep their citizens safe and it seems like somehow, the police enforcing those laws get a little bit crafty along the way. A strict social distancing law is being observed by many countries even outside of the United States just like in India where a couple of cops got creative in enforcing the law.

A recent video has just surfaced of a few violators that were stopped by the police but instead of resulting to force, the police had a better way to make sure that the violators would think twice before doing it again. The violators were then forced inside an ambulance where another police was pretending to be sick!

The whole video then revolves around the reaction of the violators while the "sick" patient was scaring them the whole time! One violator even tried to force his way out through the window but was still stopped by the police and made to go back inside.

Another violator then followed and although he was able to escape the ambulance, he was then quickly thrown back in! The hilarious video shows how the violators were scampering inside the ambulance looking like they saw a zombie.

The video was then uploaded to Facebook and has already gotten more than 81,000 reactions as well as over 12,000 comments and about 197,000 shares! This viral video has been met with much laughter and good vibes as the people watching were definitely entertained by the violators.

The message of the video

After a few minutes of begging and trying to escape, the police then let them out and explain to the media how important it is to follow the rules of the lockdown and observe proper social distancing. The video ends with one of the cops giving a speech while the violators are seen more behaved in the background.

The original source of the video has not yet been confirmed but it seems like an advertisement promoting the fact that people should stay in home and not violate the law. This viral video has made a good number of citizens laugh online and is continuing to gain even more views and shares.

The video can be seen on Gorona Murali's Facebook page but has already been shared by other pages as well.

Read Also: [Instagram Video] Cute Husky Seen Being Walked by Drone: Could This Be the New Norm for Doggo Walking?

The global pandemic is no joke as the virus has already claimed the lives of hundreds of thousands of people across the globe. Although it is still very tempting to violate the lockdown laws, those laws were created for the benefit of the citizens and not for the benefit of anyone else.

The problem the world is facing is a health problem and although this problem might not seem that serious to some, those who have already been affected would say otherwise.

Read Also: [Trailer] Ultimate Games Will Release a 'Pope Simulator' Video Game Where Players can be the Most Powerful Man in the World!