A nearby asteroid that is supposed to fly closely to Earth on May 23 has just brought disappointed to excited gazers looking forward to the spectacle. The space rock named ATLAS that was discovered by the Asteroid Terrestrial-impact Last Alert System from Hawaii in December last year unexpectedly shattered into several pieces the size of a house.

The initial discovery of the asteroid gave astronomers an exciting event to look forward to once the space rock came close enough to Earth to be visible to the naked eye.

Recently, NASA observed ATLAS seemed to be glowing brighter and would be seen on May 23 by regular gazers at a relatively close 115 million km away. The excitement died down quickly, however, as the cosmic body suddenly shattered into multiple smaller pieces.

On a positive note, visiting assistant research scientist Quanzhi Ye from the University of Maryland believes the incident could bring a more significant opportunity of finding out what happens when asteroids, similar to ATLAS, disintegrate.

The scientist said the particular development breathtaking, not only because of how rare the occurrence is but also because they are stellar and marvelous visuals to look at. He also said the majority of comets that experience disintegration is challenging to see. At most, the occurrence happens once or twice every ten years or so.

The moment that ATLAS began to lose its brightness, experts were quick to worry that it was starting to piece apart. An amateur astronomer, Jose de Queiroz, was able to support their hunch with photographs of ATLAS he captured, showing the bright asteroid falling apart into three smaller pieces on April 11.

Moving forward, observations by the Hubble caught the continuous disintegration of the stellar rock that rapidly hastened. There were up to 30 fragments seen on April 20, and by April 23, there were also 25 pieces caught in its tail. 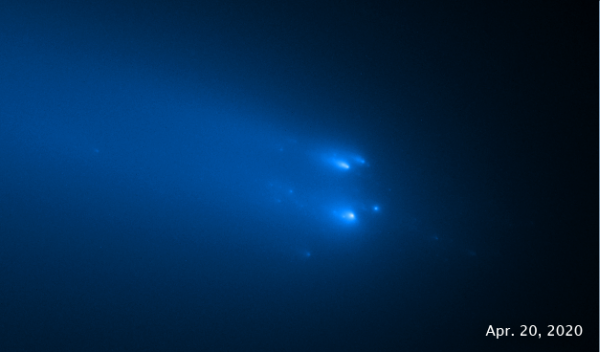 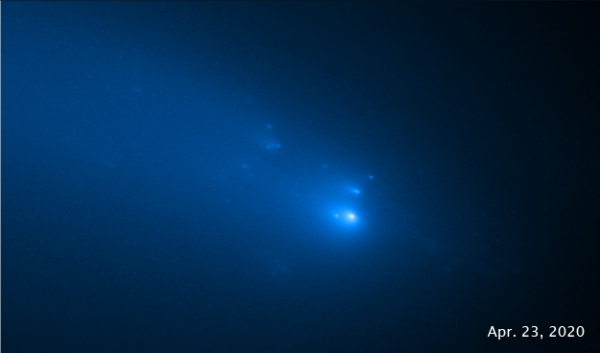 Astrophysicist David Jewitt from the University of California shared that the appearance of the comet was significantly different between the two dates, which made it far tricky for experts to figure out precisely what happened. Jewitt was also part of the team that took photographs of ATLAS.

The scientist said the difficulty was mainly due to the different light that the pieces of the comet emitted or that various parts were visible on different days. It was like watching Christmas lights blinking one after another, exclaimed Jewitt.

There is little information about the reason as to why asteroids disintegrate in the first place. Some experts believe it could be due to the cosmic rock's spin that starts a chain reaction from its core, vaporizing the icy materials on its surface.

Nevertheless, the event and further studies of the data the Hubble Space Telescope captured could lead scientists to finally figuring out the whole process that goes on at the spectacular sight of a massive cosmic rock being shredded into pieces, shared Jewitt.