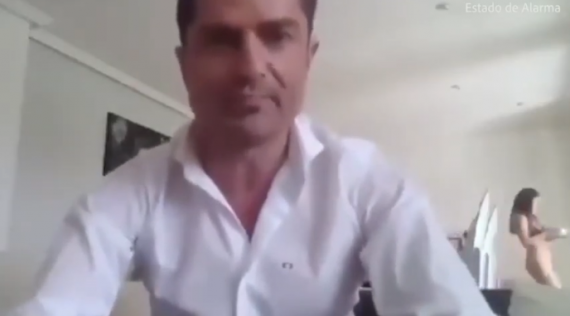 A particular Spanish news anchor was caught right on camera where viewers spotted a certain semi-naked woman, who was NOT his "Big Brother" star girlfriend, walking right behind him while he had no clue and was live on air!

A certain Alfonso Merlos, age 41, hosted the particular Estado de Alarma channel that was live on YouTube from the comfort of his home and was completely unaware that his background caused a national scandal that broke afterward!

Viewers were very quick to figure out that the woman in the background was in no way his girlfriend but rather a fellow 27-year-old journalist, Alexia Rivas. This broadcast did not just cause a huge scandal due to some famous Spanish TV personalities involved, but also due to the fact that Rivas' own presence suggested that they had both broken Spain's extremely strict coronavirus social distancing just to spend nights together!

The news anchor and his girlfriend?

This scandal even led to certain accusations of Merlos himself cheating on his Big Brother star girlfriend named Marta Lopez, the news anchor has still insisted that he and Lopez had already broken up even before this scandal took place.

After a period of silence, the news anchor finally came out and publically apologized to his ex-girlfriend during his appearance on the "The Ana Rosa Show," which is a Spanish chat show.

Rivas told Socialite that Merlos had told her that he was single and that she "didn't get into a relationship" confirming that they have been seeing each other for about three weeks now.

Marta Lopez finally spoke out and said that she and Merlos were still together at that time and even called the whole situation "shameful." She then continued by saying that they had a disagreement for four days and that Alfonso did not want her to do something that would affect her family and she did which resulted in an argument.

A Spanish news outlet called Lecturas said that they had fallen out and had spent four days apart before the broadcast happened. The couple has a son together and when the fight took place, they then separated for four days.

According to Lopez, they had both been together during the lockdown that started on March 12, two days before the country started implementing the world's hardest containment measures, and that they had spent the first half of this lockdown with each other until their recent argument.

Aside from cheating, people around the country have noted that both Rivas and Merlos broke the country's lockdown restrictions just to continue their fling!

A certain reporter from the Philippines was able to keep her cool while both of her cats had a huge fight right behind her as she was reporting live during a TV interview.

Beware of the sudden appearance of this Asian Giant Hornet in the US as they strike down other creatures without prejudice.

Have you ever had your kid straight up argue against you? We bet you haven't experienced this kid's defense!