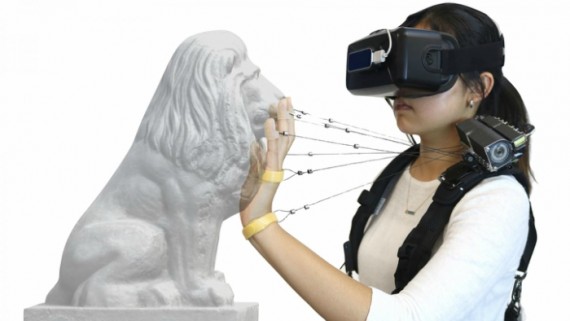 Virtual Reality was brought about by an ever-advancing technology that aimed to break boundaries and create never-before-seen creations. The main thing the technology lacked was the actual feeling of being immersed in a digital world. A new invention, however, aims to close that gap and bring reality and digital closer than ever.

Researchers from Carnegie Mellon University have devised a machine that mimics the feeling or resistance of a real-life object that is seen virtually. The creation uses a set of wires attached to a shoulder harness and your fingertips, palms, and wrists. The cables are locked in place when the user touches an object in virtual reality, replicating the shape of the object.

The inner workings of an innovative machine

The strings can let the user feel stationary walls and even contoured statues using varying amounts of tension. They also enable you to explore how giving high-five feels like in virtual reality!

The device is called 'Wireality' and was subjected to several tests and experiments to result in a lightweight, cheap, and power-efficient design. It was made to rest on a person's shoulder with wires extending towards the fingertips, palms, and wrists.

It has significantly lower power consumption compared to similar devices at the same cost. The researchers believe it would only cost around $50 for a mass-produced version. Volunteers for the experiments said it was much more realistic than other haptic feedback mechanisms available today.

Previous haptic technology utilized the power of motors to recreate the sensation of touch, but this made it relatively heavy and bulky to use, not to mention the amount of energy that they would require regularly. The Wireality team opted to make use of motor-less technology to bring the virtual world closer to reality, which had neither of these problems.

The mechanism is equipped with spring-loaded retractors similar to the ones used in crucial chains and IDs that pull back with a little bit of force. Electrical latches lock the ratchet mechanism immediately upon activation. The strings are kept tightly pulled by springs, and only a small amount of power is required to activate the latch. The whole device utilizes battery power and is immensely energy-efficient.

The device's Leap Motion sensor is connected to the virtual reality headset, which is responsible for tracking hand and finger motions. It also detects when the user's hand comes near any wall or object in the virtual world. The ratchet maneuvers itself to engage the strings suitable for whatever object is being touched. The latches then release their hold when the user pulls back their hand.

The device is a perfect fit for VR games. It can even be used in other areas/activities that are designed similarly, such as virtual museums and shops that have virtual stores for customers to see and inspect furniture before making a purchase.

The paper for the researchers' study was published in the Conference Proceedings in the Association for Computing Machinery's Digital Library.

Read Also: Chimera is Google's New Contender In Simplifying Game Development By Reducing The Amount Of Workd For Any Needed Process