The Moon is the closest cosmic body to the Earth that we have in the universe, and since the first lunar landings, there is still plenty of mystery that surrounds our space friend.

One mystery may have been answered by one Andrew McCarthy, an astrophotographer from California that was able to take several pictures of the Moon in its different phases and bring them together into a beautiful collation that shows just how lovely the so-called Luna is.

McCarthy used several thousands of pictures to bring the masterpiece to life, which took him two weeks of meticulous and challenging work. 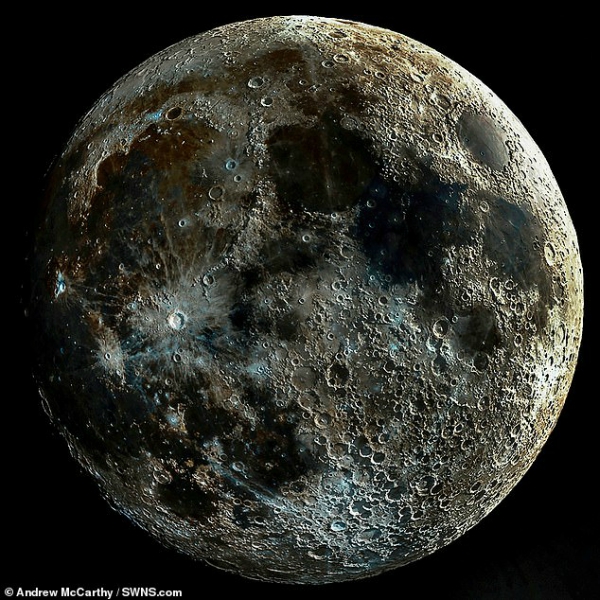 The photographer shared that due to the light caused by the 'lunar terminator,' which is the line found between the light and dark sides of the Moon, some aspects of the craters seem elongated.

In a long and challenging process, McCarthy captured photographs of the Moon where its effect is most pronounced and put them together in one detailed image.

The breathtaking image captures a fantastic array of clarity and colors of the craters and features of the surface.

The astrophotographer posted the image on Instagram and named it 'All Terminator' with a caption of "beast of a project.' He also said the image of the Moon might seem a little peculiar to most and explains that it is an incredible sight.

During the two weeks that McCarthy has been photographing the defining features of the Moon, he took only the ones that had the most contrast, which he then blended to bring the rich textures of the finished product.

The endeavor was quite exhausting as shared by the photographer, mainly due to the difficulty of taking consistent photos of the Moon that moves differently each time it passes by. He utilized 3D mapping to make the images match together into a sphere.

The equipment used in taking the shots were an ASI1600MM and the Celestron edgeHD 800. And McCarthy stated he might even be up to repeating the process all over again, but instead capturing the opposite phase of the Moon, saying, "I may or may not try this again for the waning phases depending on feedback."

The beauty of the unseen

Some experts have shared their amazement of the image, stating how beautiful the whole endeavor was.

During the terminator, which is the twilight zone or line in between the light and dark sides of the Moon, the Sun is much closer to the horizon, which leads to longer shadows that aid in the three-dimensional look of the Moon.

The effect makes the Moon's features and craters much more evident and visible. NASA has said that craters commonly appear near the terminator due to the seemingly increased height makes them more visible.

A similar case can be seen on Earth during the time the Sun is found near the horizon, creating what we know as Dusk and Dawn.

The process takes place when the Sun's light bounces off of microscopic molecules of gas on their way down to the surface of the Earth. This occurrence is what enables us to see the light of the Sun, even before it is visible or after it has already set.