A recent incident has left a mouse in a fierce battle for life or death battle with what is nicknamed the 'Murder Hornet.'

The video, which was recorded by a cellphone camera, shows the relentless attacks of the Asian Giant Hornet, the lethality of its venom, and the ferocity of its animosity.

It can be seen that the two creatures are locked in a frantic battle where the hornet was able to climb onto the mouse's back and continuously stung the defenseless rodent.

The mouse was able to slide away but was quickly captured once again by the dastard menace and, in less than a minute, was left lifeless on the sidewalk.

After finishing off its prey, as if to mock it, the giant hornet whisks itself and flies away, leaving the mouse's carcass behind.

The terrifying flying creatures are native to areas that are tropical within East Asia. The giant hornets cause a death toll of 50 humans per year due to their venomous stingers.

There have been multiple sightings of the flying menace since November last year on the west coast of North America, and people are wondering just how they arrived in the area.

The Asian Giant Hornet sports double the size of regular Honeybees and their wings stretch for more than three inches.

The fatal equipment they have, though, is their stinger that is filled with potent venom that contains a neurotoxin that causes cardiac arrest and anaphylactic shock upon its unsuspecting victim.

See the difference in size and demeanor between the friendly Western Honeybee and the malicious Asian Giant Hornet: 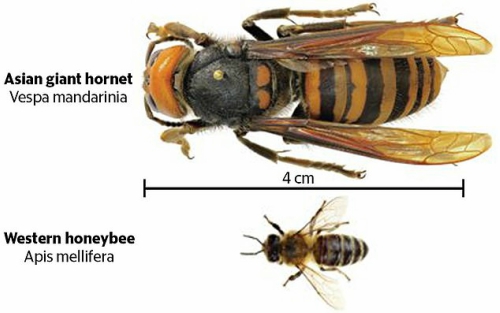 Conrad Berube, a beekeeper, shared his experience of being attacked by a swarm of the Asian Giant Hornet while he was on Vancouver Island.

How dangerous are these murder hornets?

Berube stated he felt the stings as red-hot thumbtacks that were being driven right into his flesh as he was left bleeding after the attack. He was stung seven times by the creatures and considered lucky to be alive.

Entomologists said that despite being dangerous to humans, a more pressing concern for the scientific community is the hornet's effect on the bee population that resides in North America. This is due to the giant hornet's ferocity and ability to decimate a beehive in just hours thoroughly.

A beekeeper in the state of Washington reported last November seeing thousands of his honeybees with their heads torn right off their bodies. He shared his confusion about the incident and couldn't figure out just what exactly happened to his hives.

The Asian Giant Hornet mostly nest under the ground for the better part of the year and is most active during the time between July and November.

Experts are now set to launch a proper investigation to hunt down the hornets before they have a chance to breed and multiply, causing a massive threat to other animals and humans alike.

An entomologist at the Washington State Department, Chris Looney, said this is their chance to make their move. The expert has previously set out into the woods to try and capture the hornets but thinks it will be a difficult task due to how agile the creatures are.

He also shared that if they fail to capture and contain them now, it will be impossible to do so after a couple of years.

The recent arrival of the unexpected visitors comes as an addition to the US' growing list of major disasters to hit the country in 2020.