Ambulance Does Popular "Coffin Dance" with Coronavirus "Patient" on TikTok: Too Dark? 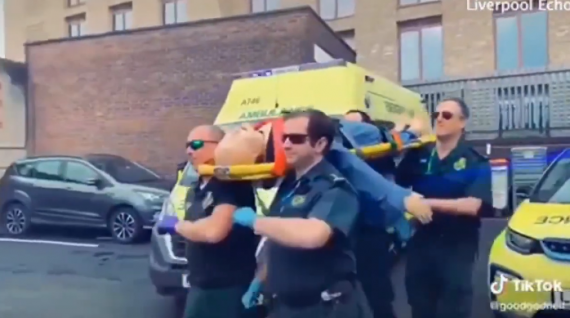 The popular "coffin dance" has become a phenomenal hit as a group of African gentlemen in suites dance while carrying a coffin on their shoulders. This viral video started gaining massive attention over the internet with a specific song attached to it.

The popular song accompanying the "coffin dance" is an EDM song known as Astronomia by Vicetone and Tony Igy and is usually accompanied in clips with this dance.

The concept behind doing the coffin dance is basically signifying death in general in more "oops" matter rather than with grievance.

Just recently, a group of ambulance workers has been receiving backlash online over a controversial TikTok "coffin dance" video they posted went viral. The video was uploaded to social media on Tuesday and showed a certain man looking unwell and coughing at the back of the ambulance.

As the healthcare workers are struggling to look for the life-saving PPE, the music slowly creeps in and the workers suddenly do the coffin dance with a dead "patient" on the stretcher.

This was originally reported by Liverpool Echo and has grown in popularity ever since then. The backlash that the ambulance workers received have been growing in numbers due to the "insensitive" video.

Although the video has officially been removed by the uploader, a few copies of the video are still circulating the internet. Before the video was deleted, it had already been watched almost 40,000 times.

The ambulance service has already given a statement regarding the video saying that the staff that participated in the video meant no offense, but it had actually breached their own social media policy.

A spokesperson working for the NWAS told the Liverpool Echo that despite using social media, their employees are still expected to act professionally at every given time and should observe a professional behavior as if they were at work.

The grounds for its removal were pertaining to the breach of social media policy and not directly to the fact that the video was insensitive.

Just recently, another disturbing TikTok challenge has surfaced called the "pee your pants" challenge where participants literally pee their pants.

The coffin dance is not much of a challenge but rather a parody of the original dancers from Ghana. Although the ambulance workers thought it was a fun way to participate in this parody, apparently social media was not too kind to them.

The video has been taken down but has still been reuploaded by various individuals with a copy of the video.

Read Also: Justin Bieber and Ariana Grande's Upcoming Music Video Almost Included Carole Baskin! Appaently, One of Them was Not Happy with the Idea

How to Make a Profit on TikTok: Social Media Influencer Shares Money Hack

What was previously just thought of as a "teen fad" now has celebrities and other big-name entrepreneurs like Gary Vaynerchuk declaring the power of TikTok.

Perfect symmetry can be pleasing for some things but when it comes to the human face, a doctor