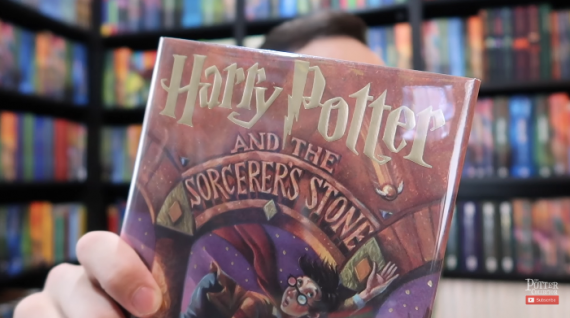 Three different first-edition Harry Potter books were recently salvaged from a SKIP store and are currently expected to amount to about $22,000 in an auction this very month!

A certain teacher was able to get these books after they had simply been thrown out into a small tidy-up at the school that she worked in located in Buckinghamshire back in 2008.

The insides of this tidy-up contained a rare hardback copy of the first edition of Harry Potter and the Philosopher's Stone. The reason why this is a rare edition is that only 500 copiers were first published in the print run.

The Harry Potter and the Philosopher's Stone book alone is expected to bring home a surpising $14,000 in an online auction that will take place by Staffordshire firm Hansons Auctioneers this coming May 21.

The other two Philosopher's Stone paperback books are expected to sell between the range of $2,400 and $3,700 for each copy.

The teacher is currently a 65-year-old grandmother who does not want to be named in the article. Her statement was just that she loved reading books and felt it was a shame to see them thrown away.

According to her, she just picked up those five Harry Potter books for her children or grandchildren but did not expect them to amount to such value.

The teacher also noted that the school originally had ten different copies of the Harry Potter hardback first editions but it is hard to trace what happened to the other nine copies.

A certain book expert from Hansons, Mr. Jim Spencer, said that these "Hardback first editions of Philosopher's Stone are as rare as hen's teeth."

Books can be considered a prized possession especially when given the rarity and historical value of these books.

When J.K. Rowling first released the Harry Potter book, she was not yet an esteemed writer and was barely getting by. The importance of the first edition marks the start of more than a decade long franchise that has gathered an international following both for the book and also for the movie franchise.

Even most of Stephen King's first edition of The Shining is said to cost between $4000 and $6000. To a collector, the prestige of owning these first editions is worth quite a sum.

With the current pandemic ongoing, the release date to the next installation is still unknown and even the cast still remains at the question with the unsure inclusion of Johnny Depp.

"Harry Potter" writer, J.K. Rowling has finally announced that she has finished writing the script for the sequel of "Fantastic Beasts and Where to Find Them".

Stephen King's "The Dark Tower" teaser was released few days ago and multiple viewers and intrigued about King's new movie. Also, Idris Elba and Matthew McConaughey will spearhead the film.

'Harry Potter And The Cursed Child' Update: Stage Play Gets A Whole New Cast; Here's Why

The two-part Olivier Award-nominated stage play is bidding its goodbye to its original cast and is set to welcome a new set of all-star cast. And, as JK Rowling’s grown-up wizard prepares to refresh its lineup, Broadway production is also on the works.

Harry Potter fans have reportedly spotted an Easter egg on the new "Beauty and the Beast" clip and it has made them nostalgic.

A new species of crab has been discovered in Guam. It takes the name of a book character who made waves worldwide.