Tourism has advanced its way to the skies and is now taking a dive underwater. A new incredible submarine is finally accessible and can give tourists underwater tours of the sea like no other.

The submarine is called the Triton DeepView 24 and is designed to take 24 passengers into the depths reaching into the mysterious 100meter plunge. This journey allows them a view like no other with vast panoramic windows and all the comfort for almost 15 and a half meters included with air-conditioning, comfortable seats, and enough space to stand up in.

Triton Submarines have previously manufactured the Limiting Factor submersible last 2019 and made a record-breaking achievement of diving into the deepest point of the ocean known as the Mariana Trench located 10.927 meters from the surface.

This Floridian company gave a statement regarding the DeepView 24 saying that it is the "most significant commercial tourism submersible" that has ever been offered in the span of the last two decades.

The company explained that the vessel is virtually silent and entirely non-polluting. Other factors that make it amazing is that it is easy to board and load off and even gives the passengers a generous room for mobility due to its spacious access hatch.

The company continued saying that the DeepView 24 was actually developed as a response to the increasing demand of travelers and tourists that are looking for an adventure and experience like no other.

The company aims to offer a "sub-sea tourism" experience as international popularity has started to pick up after programs like Blue Planet II. According to the company, they are able to offer a perfect hull of the Triton DeepView 24 that in turn creates an entirely new generation of different stewards for the deep ocean.

This vessel has already been commissioned by a certain hospitality firm known as the Vinpearl to provide their guests with experiences on both the Hon Tre Island located in Nha Trang, Vietnam.

This vessel was previously manufactured at Triton's facility located in Barcelona, where it was able to pass sea trials back in March. It is now on schedule to operate ticketed dives for certain resort guests this coming December. 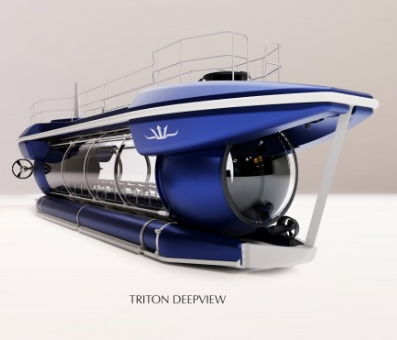 According to the Co-Founder and CEO of Triton Submarines, Mr. Bruce Jones, the Triton DeepView 24 packed with its amazing panoramic view represents a certain quantum leap forward within the submarine technology. This being their ability to provide vastly improved experiences for their guests.

The CEO continues stating that out of about 60 tourist subs that have previously operated in the past 34 years, their DeepView 24 is currently superior in all respects.

In addition, the CEO notes that the variation in size along with the models that seat from about 66 passengers gives of the confirmation that there is a  sub suitable for a wide variety of operations around different locations.

Bruce Jones also noted that the DeepView experience is great for guests to promote proper "environmental stewardship" after being able to experience what it's like on the seafloor environment.