[Spotted] Maye Musk's Picture With Elon Musk Shows 3 Hidden Bionic Figures Behind: What Could This Mean?

A public Facebook group dedicated to Elon Musk has just posted two pictures of Musk with a woman named Maye. Kai Erven posted a public post on the Tesla CEO, stating how she is curious about the background of the picture she posted on the Facebook group. 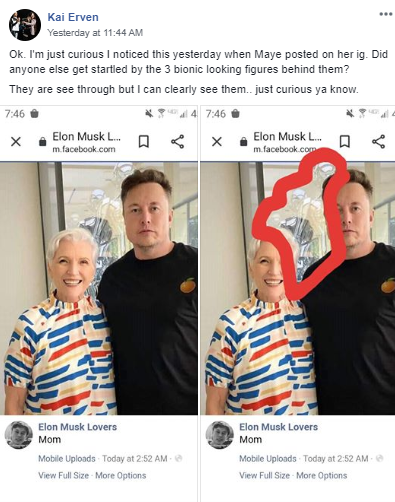 Erven's friend, Maye, posted on her personal Instagram account a picture she had with Musk. The Facebook public group poster was alarmed with the background of the picture her friend had with the SpaceX CEO.

The camera angle was captured in a way that lets someone see the light of the sun reflecting through the glass wall behind the duo, ultimately showing the environment the pair can see in front of them. Many people were amused by Erven's reaction to the pictures, stating how they will all be watching out for bionic figures.

Some were not all too pleased with the Facebook post, directly saying that the reflection of the photography lighting lamps had something to do with the bionic looking figures behind the duo.

In accordance to an article from a technology news website, Elon Musk has unconsciously created a fandom of his own. The vast scope of the online world has fans of the SpaceX CEO thinking that he is some type of legend.

These people are allured by Musk's charming personality and the wealth he has worked hard for with his intelligence and knowledge on the scientific technology world. Because of the success that the multibillionaire has exhibited to the whole world, his followers aspire to be as intelligent and successful as him.

Musk made cameos in many movies and television shows such as Iron Man 2, Big Bang Theory, and Rick and Morty. In the Iron Man 2 movie, he was seen making small talk with Tony Stark. This makes Elon Musk canon to the Marvel Cinematic Universe.

Musk also made a cameo in Big Bang Theory, interacting with Howard in a restaurant kitchen.

The Tesla CEO set down a container full of dirty dishes near Howard. The main Big Bang Theory character Howard, suddenly noticing that the man setting down the unclean plates was his idol, was surprised to see Musk cleaning dishes with him of all people.

Rick and Morty also featured the SpaceX CEO in one of its episodes, naming the Tesla CEO "Elon Tusk."