Will the Wuhan Greenland Center be able to restore the now-tainted reputation of the city due to the ongoing coronavirus pandemic? After all of the heat that Wuhan has received worldwide as the city that brought the world COVID-19, the city is still slowly picking itself up from an extreme lockdown that paralyzed its economy and isolated its people for a long time. 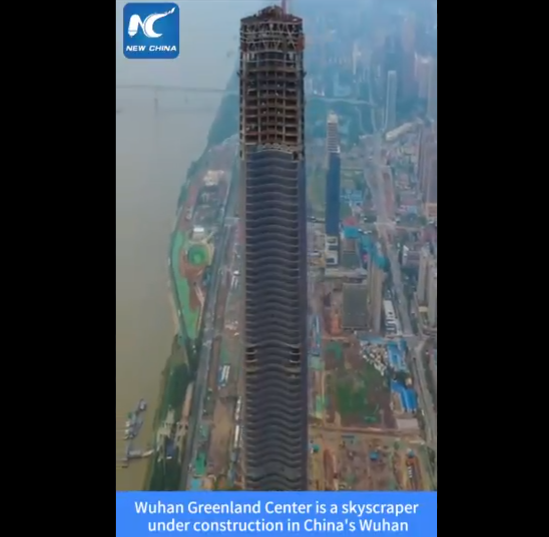 (Photo : Screenshot From China Xinhua News @XHNews Twitter Page)
[Viral Video] After All the Controversy Over the Coronavirus, Wuhan China Plans to Build the Tallest Skyscraper Ever!

Wuhan is currently focusing on building the tallest skyscraper in their area which will be dedicated to office spaces, hotels, restaurants, and everything commercial. What else do you think would fit inside a skyscraper? This is also a huge logistical question that you may ask yourself when you look up at a skyscraper.

This skyscraper under construction is expected to be the highest in Wuhan, China once it's completed pic.twitter.com/vrxUNwWLK0 — China Xinhua News (@XHNews) July 7, 2020

China Xinhua News posted a video on Twitter showing the construction of this impressive building, but sadly, the video did not really elicit the best responses. Some people were still infuriated after the whole discussion and how the world solidified the idea that the coronavirus indeed came from Wuhan, China.

Despite all of the hatred, there were a few on the post who were neutral with the situation. A certain person commented on the height difference between the Wuhan Greenland Center that is currently being constructed reaching as high as 636 meters tall. The Shanghai Tower, which is another skyscraper, is only 632 meters high, while the World Trade Center located in New York was only 546 meters tall.

Currently, the Burj Khalifa located in Dubai is still taller at 828 meters.

The comment section is a whirlpool of different reactions with some people admiring the architecture while some people expressing criticism. There was even an article that was shared written by The Guardian explaining how skyscrapers are related to toxic masculinity.

Read Also: [Watch] NASA Updates What Happened In the Past Week: How Are We on the Artemis Program?

The comment section alone shows just how many different opinions people still have about Wuhan and how the reputation of the place has really changed ever since the coronavirus pandemic. The once popularly known place for manufacturing has now become somewhere where people avoid going or even making contact with.

The thing about the comment section is that the hate does not necessarily just target Wuhan itself, but rather the whole of China. This is a huge blow as the hatred is directed towards a country that actually manufactures a huge majority of the world's materials.

China has already cemented itself as one of the largest manufacturing nations and this is because of its cheap labor force, vast land,  and the use of charcoal which is a much cheaper alternative for energy in order to power up a fraction of their factories.

Due to the low production costs, China is able to manufacture certain items at only a fraction of the cost that they would usually be sold in other countries.